Home Archives Subscribe Back to TradeWatch.org
On NAFTA, Hillary called a pickpocket, leader of band of child criminals, and good at avoiding responsibility or the consequences of her actions
Lori Wallach on Bill Moyers tonight!

Millions of Those Harmed by Fast Track-Enabled “Trade” Deals Celebrate 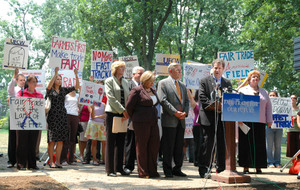 After a brief, damaging existence, Fast Track was pronounced dead on June 30, 2007.

The demise of Fast Track allowed the U.S. Founding Fathers to stop rolling in their graves over Fast Track's trampling of constitutional checks and balances. As well, victims of Fast Track-enabled trade agreements welcomed the news, given the anomalous procedure's record of damage despite having been locked up and out of commission for blocks of time since its inception.

In April 1973, America first saw the faint glimmer in Father Nixon's eye that was to become Fast Track when the Nixon administration - always eager to seize power from the legislative branch - dropped the initial Fast Track legislation. The young Fast Track - the product of a broken and abusive home - had an unusually long gestation period, taking over a year and a half to be unleashed by President Ford, who signed the first Fast Track bill into law. Fast Track teethed on federalism and checks and balances, shredding basic tenets of our democracy.

Fast Track delegated away Congress' exclusive constitutional authority over trade - allowing the executive branch alone to choose trading partners, set the substantive terms of trade policy, and even sign trade agreements, all before Congress ever voted. The controversial delegation mechanism allowed Congress only a yes or no vote on trade agreements after they had been negotiated and signed and by its very design shut out public and congressional oversight.

Unleashed again in 1988, the troubled Fast Track became a violent adult with a pathological disregard for the middle class, family farmers and the environment. After enabling the North American Free Trade Agreement (NAFTA) in 1993 and the World Trade Organization (WTO) in 1994, Fast Track found itself friendless when in 1995 its 1988-granted parole ended.

In 1998, members of Congress explicitly voted to keep Fast Track locked away as the policy and political damage of the Fast Track-enabled NAFTA and WTO began to come home to roost. For only two years of the eight-year, 130-trade-agreement Clinton administration was Fast Track out and about. The facts of President Clinton being able to pass several controversial, major multilateral WTO agreements and the Jordan Free Trade Agreement and China PNTR without Fast Track does not in any way diminish the claim that it is impossible to do trade agreements without Fast Track, said Gucci Loafers, a major K Street lobbyist.

In 2002, after Fast Track had been kept locked up for a quarter of its 27 years, another power-grabbing president, George W. Bush, struggled through a two-year, arm-breaking-for-votes campaign that featured a one-vote margin that unleashed Fast Track one last time.

Fast Track's lifelong philosophy was, "Just trust the president." Even after being kept in chains for much of its existence, Fast Track's legacy includes millions of peasant farmers who have been displaced by fast-tracked trade deals, workers whose wages have remained stagnant since Fast Track's hatching in the mid-70's, millions of Americans made ill by fast-tracked trade deals that required food imports not meeting U.S. safety standards, the evisceration of the U.S. manufacturing base, and much more damage. Many Americans celebrated Fast Track's long overdue demise and joined a national day of prayer for a better procedure that in the future could replace Fast Track to ensure trade agreements would benefit the majority.

Those deeply connected to Fast Track, including President Bush and representatives of the National Association of Manufacturers, the American Chamber of Commerce, Pharma and other corporate lobbies, gathered at board meetings and campaign fundraisers to mourn their loss.