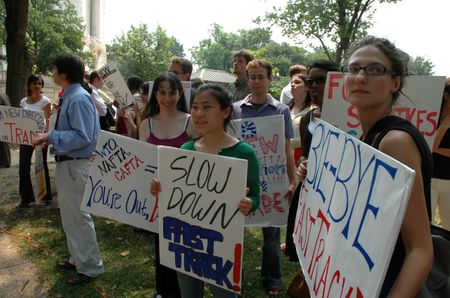 Midnight has passed, and you know what that means: bye-bye Fast Track. Here are some more photos from an event last week hosted by Sen. Sherrod Brown (D-Ohio) celebrating Fast Track's passing and heralding new directions for U.S. trade policy (see the full photo set here). After the break, see some statements from various groups about the expiration, and what they think should come next.

Here is the press release from Sen. Brown's office regarding the event pictured above:

“Voters in November spoke out against the job-killing trade pacts and fundamentally-flawed trade policy of the last decade,” Brown said. “We have a choice to lower our standards or demand our trading partners raise theirs. Today, we set our nation on a new course for trade that works for U.S. businesses and workers, not just multinational CEOs.”

In 2006, the U.S. trade deficit reached a record $836 billion, the fifth consecutive annual record. Meanwhile, in the past six years, the U.S. lost 3 million manufacturing jobs, and Ohio lost more than 180,000, highlighting the need for a sound trade policy. This year, Congress is expected to debate proposed free trade agreements with Peru, Panama, Colombia, and South Korea.

“We can sit by idly as countries like China use unfair subsidies, manipulate their currency, suppress human rights and export unsafe products, or, we can choose to confront these economic and health dangers and get proactive on trade. All of us want trade and more of it. But we want trade to produce positive results, not faulty products, massive job loss, and unprecedented trade deficits,” Brown added.

"This weekend, President Bush's 'Fast Track' trade negotiating authority expires for good. It has been a long and difficult five years for workers everywhere. With the expiration of Fast Track, perhaps this finally means that we can move in an entirely new direction on our trade and globalization policies... Rather than staggering blindly into extending Fast Track, our nation needs to regain our economic footing. We must have a real discussion about the real costs and impacts our trade policies have had for working men and women here at home and abroad."

"Fast track’s end shows that the American people are fed up with the globalizers and outsourcers and what their favored trade policies have given us: gargantuan deficits, stunning job losses, serious wage decline, and productive stagnation. These are the results of trade policy business-as-usual. As the next presidential and Congressional election cycle begins, smart politicians will start taking the hint and pushing for a thorough trade policy overhaul... Never again should presidents be given blank checks that place trade policymaking beyond the businesses and workers that produce our nation’s wealth."

"Under the expiring TPA [Trade Promotion Authority, i.e. Fast Track], Congress restricted itself to a superficial review of trade agreements instead of engaging in close scrutiny. With a 'hear no evil, see no evil' approach to trade oversight under TPA, it is no surprise that three million U.S. manufacturing jobs have been lost since 2001. That's why the process of how the United States crafts its trade policy must be changed... TPA perverted the legislative process by effectively preventing negatively affected industries and interests from airing their concerns in Congress."

John Sweeney, President of the AFL-CIO:

"This week, working families, both here and abroad, will gain a little more security as President Bush's 'fast track' authority to negotiate trade agreements with minimal input from Congress will expire. For the last six years, this Administration has negotiated one bad trade deal after another, each agreement passing by the slimmest of margins, over the objections of working people worldwide... Congress must use this opportunity to assert its constitutional authority over trade policy, so that it can craft a set of rules that will put the interests of working families in the U.S. and around the globe front and center, instead of those of corporate interests."