Our new report is out! You can read the press release below and here, take action on the Public Citizen homepage, and read the report (PDF). 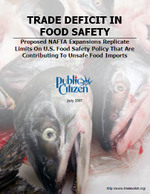 The report, Trade Deficit in Food Safety; Proposed NAFTA Expansions Replicate Limits on U.S. Food Safety Policy That Are Contributing to Unsafe Food Imports,   documents the connection between trade agreements that limit domestic food safety policies to facilitate trade and the growing safety threat posed by food imports, which have doubled since implementation of the North American Free Trade Agreement (NAFTA) and the World Trade Organization (WTO) agreements. Available projections for the proposed Free Trade Agreements (FTAs) with Peru, Panama, South Korea and Colombia show an increase in food imports, while the deals would also replicate past trade pact limits on safety standards the United States can require for imported food and how much inspection is permitted.

“We face a perverse situation in which Congress is rushing to address serious safety problems with the growing amount of imported food Americans consume while four more NAFTA-style trade deals are pending that will undermine Congress’ ability to ensure our safety,” said Lori Wallach, director of Public Citizen’s Global Trade Watch division. “This is a trade problem that is not just about China, but rather goes to a trade model that prioritizes increasing the volume of traded food over safety.”

A steadily increasing amount of food on U.S. dinner plates is imported. Nearly $65 billion in food is imported annually – almost double the value imported when NAFTA and the WTO went into effect. More than 80 percent of the seafood Americans eat is imported.   In the NAFTA-WTO era, seafood imports have increased 65 percent. Between 1995 and 2005, shrimp imports alone jumped 95 percent.   In 2005, the United States, formerly known as the world’s bread basket, became a net food importer for the first time, with a food deficit of nearly $370 million.

“The way these trade agreements are written, U.S. farmers and ranchers will be locked into a competitive disadvantage. As a result, we will continue to see an erosion of our rural communities that are dependent on the U.S. cattle industry because we will be systematically replacing domestic production with larger volumes of imported product,” said Bill Bullard, CEO of the Ranchers-Cattlemen Action Legal Fund, United Stockgrowers of America (R-CALF USA), a national independent cattle producers’ association.

In 2006, the FDA inspected only 1.93 percent of seafood imports, and just .16 percent of the 859,357 shipments of seafood were refused entry. The rest made it onto supermarket shelves and may have contributed to the 17,252 laboratory-confirmed cases of foodborne illness confirmed by the Centers for Disease Control and Prevention (CDC), a number that may represent only a portion of the total amount because many cases are not reported to local public health officials or the CDC. The estimated annual incidence of infection with Vibrio, a diarrheal disease associated with seafood, increased 78 percent from 1996 to 2006.

The proposed Peru and Colombia FTAs are anticipated to increase seafood imports. Already, Peru, Panama and Colombia are three of the world’s top 20 exporters of shrimp to the United States. New analysis of government data obtained by the nonprofit organization Food & Water Watch under a Freedom of Information Act request shows that FDA inspectors have rejected seafood from Peru and Panama for numerous reasons including filth, adulteration, misbranding and the presence of dangerous foodborne pathogens. Both Peru and Panama have major export fishing sectors. Peru’s marine and inland capture fisheries production is the second highest in the world – second only to China. The Public Citizen report contains startling charts and graphs, including those that break down reasons for rejection of Panamanian and Peruvian seafood over the past nine years.

Trade rules incorporated into the proposed FTAs with Peru, Panama, Colombia and South Korea limit food safety standards and border inspection. The agreements require the United States to rely on foreign regulatory structures and foreign safety inspectors to ensure that food imports are safe. Unfortunately, data analyzed in the report show that many foreign regulatory systems are simply not up to the task. The pacts require that U.S. food safety regulators treat imported food the same as domestically produced food, even though more intensive inspection of imported goods is needed to compensate for often weak domestic regulatory systems in some exporting nations.

“Passage of the pending FTAs would elevate, not lessen, the threat to the safety of the U.S. food supply,” Wallach said. “The FTAs could have been an opportunity to create a new model for enhanced food safety in trade. Instead, the agreements, if implemented as written, may well generate the next spate of news reports about problems with food products from these countries.”

Contrary to what consumers believe, the vast majority of imported foods that end up on the dinner plates of U.S. consumers is unexamined and untested. While the U.S. Food and Drug Administration (FDA) has jurisdiction to ensure the safety over the vast majority of food imports, it will conduct border inspections on only .6 percent of imported vegetables, fruit, seafood, grains, dairy and animal feed in 2007. This is down from an already disconcerting eight percent prior to NAFTA and WTO. Only 11 percent of imported beef, pork and chicken is inspected at the border by the U.S. Department of Agriculture (USDA).

FDA data makes clear that Americans are three times more likely to be exposed to dangerous pesticide residues on imported foods than on domestic foods. Even with this limited inspection, FDA has caught numerous dangerous substances in imports from Peru, including illegal pesticide residues on fruits and vegetables, the parasite cryptosporidium in salad vegetables and basil, unknown and unapproved drugs and capsules (including filthy and unapproved shark cartilage capsules and unapproved cats claw capsules), Listeria in avocadoes, and unsafe color additives in chocolate bonbons and soft drinks. Similarly, the agency has caught dangerous products from Panama.

The pending FTAs establish new committees to speed up implementation of mechanisms to facilitate trade rules, including “equivalence determinations,” which require the United States to permit imports of meat and poultry products that do not meet U.S. safety standards.   Once so-called equivalence is achieved, products to be imported into a country must meet only the standards of the exporting country – not those of the importing country.

“The Democrats won their majority in no small part thanks to the tide of public support for a new direction on trade that resulted in the replacement of 37 supporters of this failed trade model with fair traders,” said Todd Tucker, research director of Public Citizen’s Global Trade Watch division. “This election trend should have provided a clear warning that Americans will no longer stand for the trade agreement bait and switch. Time is overdue to replace the NAFTA-WTO model with a new American trade policy that raises, instead of lowers, standards and prioritizes health and safety over increased trade volumes and corporate bottom lines.”

Public Citizen’s report concludes with tips for consumers on how to protect themselves from unsafe imported food and a list of desperately needed reforms to U.S. trade and food safety policies.

INFORMATION about the events and for quotes from the participants.