Home Archives Subscribe Back to TradeWatch.org
We are the "world's biggest loser"
Why is NAFTA interfering with our transportation policy?

The Times had this interesting story this morning, again raising questions of exactly where the buck stops for consumer protection in the global economy, and whether corporations can meaningfully self-correct in this rotten system they helped build:

Mattel makes its best-known toys, like Barbie dolls, in its own 12 factories. But even as it has increased the share of toys it makes itself to about half, it still relies on roughly 30 to 40 vendors to make the other half. Mattel now realizes it was not watching those companies closely enough, executives here said.

Mattel vetted the contractors, but it did not fully understand the extent to which some had in turn subcontracted to other companies — which in turn had subcontracted to even more. Mattel required its vendors to list subcontractors, so Mattel could visit them, but Mattel is investigating whether that procedure has been followed. A number of companies whose factories Mattel had never visited may have had a hand in making the toys that were shipped around the world...

Mattel executives in Hong Kong are trying to figure out how many subcontractors became part of its lineup...

Mattel closed its last American factory, originally part of the Fisher-Price division, in 2002. The bulk of its products have long been made in Asia.

Indeed, as this graph I put together below shows, since the worst boy band ever helped pass China PNTR, China (with all the accompanying safety/transparency problems common to authoritarian states) is rapidly overtaking all other countries (especially North American and Western European countries) in U.S. toy imports. 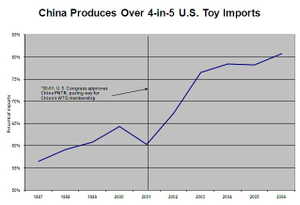 This comes on the same day as a report about rising Chinese wages, which American companies have tried to suppress.