Home Archives Subscribe Back to TradeWatch.org
John Edwards Announces Opposition to the Peru FTA
I remember Halloween, and I have Ways and Means to thank for it

A good book to read: Dreampolitik

My friend Stephen Duncombe from NYU put out a book about a year ago called "Dream: Reimagining Progressive Politics in an Age of Fantasy." As you put together your post-Peru FTA reading list, I would highly encourage you pick this one up. Here is an excerpt of a review I wrote with my brother, arts activist and all-around Chicago guru Daniel Tucker.

Any progressive activist in recent years would be familiar with the following scenario: a 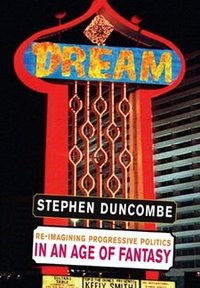 group that has a history of working together is plotting out upcoming actions and campaigns. As they seek feedback on their plans from a wider circle of friends and colleagues, they run into someone – perhaps a public relations leader, perhaps a political communications professor… let’s just call them “framing gurus” for short – who vigorously insist on the centrality of messaging, sound-bytes, and narratives. While any activist group worth its street cred would undoubtedly concur with the importance of adequately representing your platform, such tactical considerations – when pushed to the extreme – can obscure longer term goals and strategies.

A related debate is taking place on the national level, where one of the most influential books for the Democratic Party in recent years has been George Lakoff’s “Don’t Think of an Elephant.” In it, he argues that Democratic candidates could gain support by describing their platform in terms of broad social values that would activate “frames” in voters’ minds, rather just reacting to the GOP. A whole host of Democrats did just that, for instance by describing their opposition to Bush’s “free trade” policies in terms of being “for the future of the middle class.”

But activist Stephen Duncombe argues that much more than just framing exercises is needed if progressives are going to move beyond a few electoral victories and ad campaigns into a vibrant and sustainable movement capable of checking corporate power and pushing elected officials further to the left.

Read more on my bro's blog, and Duncombe's site is here. And since we're still focused on Peru, you can watch the Ways and Means Committee final mark-up right now.

This book is very compelling--one of the best books on cultural studies and contemporary theory I've ever read. It articulates many points that needed to be said to the left about their stunted approach to political spectacle, something that the right has so exploited of late. Critical and relevant, the book reads like a revitalization of progressive thinking that is unafraid to make bold claims which make sense in millennial society but are reminiscent of the refreshing radicalism of the 1960s.