With last night's win for Obama and Huckabee, there will be increased scrutiny on the record of these candidates. (This has already begun over at IELP and the Custom House and here in the press.)

Huckabee has some comments on globalization and is perceived to be running an economic populist campaign. People will be looking for more detail. As governor of Arkansas, Huckabee was one of only 8 governors to explicitly put their state onto the procurement chapters of pending trade agreements including CAFTA (in 2004) and the NAFTA expansions to Peru and other Andean countries (in 2005).

Regular readers of this blog will know that there's a great deal of opposition to these procurement and other harmful trade pact provisions. Common state economic development and environmental policies are prohibited by trade agreement procurement rules. Such policies include:

Obama, for his part, has been further articulating his trade position over the last few months, after supporting the Peru FTA, and another past vote on a NAFTA expansion. As we've reported here, Obama has been taking increasingly specific positions on product safety, and made other comments in a note to the Iowa Fair Trade Campaign. All in all, trade is playing a major role in this race, as it did in 2006 as well. (For more on this argument, see David Sirota and John Nichols.)

But aside from some of the insightful analysis that's taken place, there's this from David Brooks in today's NYT:

Huckabee understands how middle-class anxiety is really lived. Democrats talk about wages. But real middle-class families have more to fear economically from divorce than from a free trade pact. A person's lifetime prospects will be threatened more by single parenting than by outsourcing. Huckabee understands that economic well-being is fused with social and moral well-being, and he talks about the inter-relationship in a way no other candidate has.

Stumo already took a jab at Brooks, but I asked an economist friend who specializes in labor and family economics to break it down a little more for me. Here's what she had to say:

Middle class families fear divorce because it put them at risk of poverty and bankruptcy. The problem, however, is not the failure of families to stick together, it's that the it now takes two incomes to raise a family. A generation ago, a single breadwinner could support a family, but this is no longer the case. The overwhelming majority of children living in married-couple families have no stay-at-home parent. This means, that today when a family gets divorced, the incomes are cut in half, whereas a generation ago, the mother could enter employment and thus the income fall would not be as large. Families with only a
male-breadwinner have incomes that are the same, in inflation-adjusted terms, as they were in the mid-1970s, whereas it is only families with a working wife who have seen their incomes rise. Trade policy certainly plays a role here, as median male wages are currently barely above their 1973 level.

And if you don't believe her, here's a nifty graph to prove it. 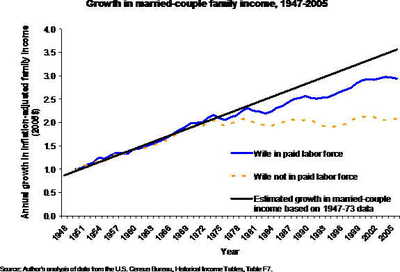