Colombia-Congress-Fast Track: What happened, What we will do, and What you should think 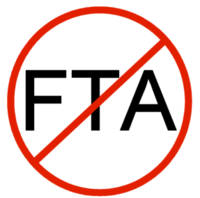 Public Citizen will apply its full resources to ensure that the Colombia Free Trade Agreement is defeated by Congress.

The United States should never have negotiated a trade agreement with Colombia, a country with a shameful record of labor leader assassinations and systematic violence against Afro-Colombian communities whose current government has been linked to deadly right wing paramilitaries.

The Colombia FTA includes the most egregious provisions of NAFTA, including extraordinary foreign investor protections that promote offshoring of U.S. jobs and expose domestic health and environmental laws to attack in foreign tribunals; and agriculture rules that will devastate hundreds of thousands of subsistence farmers in Colombia, making them poorer and undermining U.S. security interests in the region. The deal also replicates NAFTA's  limits Buy America and green procurement policies and on imported food safety and inspection requirements.