Home Archives Subscribe Back to TradeWatch.org
Who's saying what about the TRADE Act
Privatization as a cure for preemption?

I was lucky enough to catch David Sirota's book tour when it swung through Washington, which he makes clear in his new book "The Uprising" is his least. favorite. town. ever. (Wow, I've never done that period thing before - makes me feel good to join a common blogger convention! Did I do it right?) He's been making the rounds, telling activists and whomever else would listen that, yes, Virginia, there is a politics outside of electoral politics. 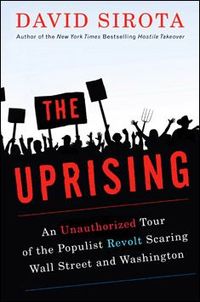 Documenting these small p politics is what "The Uprising" is all about. While David's last book, "Hostile Takeover" was more of a wonk-policy piece, this latest book leaves the theory and the legislation to one side and tackles what motivates people to get involved and stay involved in movements that fundamentally challenge the status quo. He dissects the failure of the anti-war movement to end the war, the spectacular organizing that our friends at WashTech are doing with tech workers in Seattle, as well as the fusion electoral efforts of our other friends in the Working Families Party in NY state.

David doesn't shy away from something that hasn't been talked about so much since the days of NAFTA and the Seattle WTO protests, which is the possibility that both right and left groups have a common interest in an uprising against entrenched and unaccountable elites. Towards this end, he hangs around with Lou Dobbs and the Minutemen (not at the same time) on the border to see what makes them tick, and what about current politics pushed them into more insurrectionary modes of political action.

To the extent that the book has a thesis, it's that uprisings are a natural and necessary response to an era when the center of empire is unresponsive to popular demands and ceaselessly attempting to coopt all dissent into channels palatable to the powerful. As the Rolling Stones asked in "Street Fighting Man", "what else can a poor boy do but sing for a rock and roll band?..."

David's answer: take that righteous anger you feel at being shut out, and ensure that it moves in a progressive, movement-building direction. (tangent: is the RNC trying to say that BHO is a street fighter?? Look at the resume section.)