Folks in Montana are what? 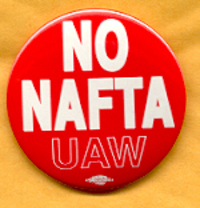 There has been a series of news items over the last few months that suggest that the presidential candidates are softening their trade positions just because they don't have a No to NAFTA symbol tattooed on their forehead. Here is one example from a few days ago, but there have been others that we've written about.

Here's a quote from the recent article:

Hillary Rodham Clinton and Barack Obama have been largely silent on the issue of free trade agreements as the primary season is set to end Tuesday in Montana and South Dakota, where agriculture and exports reign supreme.

The article then references the support of Sen. Max Baucus (D-Mont.) and former Sen. Tom Daschle (D-S.D.) and some corporate ranchers for trade deals as evidence that these states are in love with the status quo.

But this is ridiculous. As we've written before, "more exports" does not equal rural prosperity. In fact, often times the opposite is true, since prices matter more than volume.

Politically, it's boneheaded analysis as well. Baucus gets unbelievable heat for his dogged attachment to the status quo, as when the Montana legislature gave him a smackdown last year over his support for Fast Track for Bush. And Democrat Jon Tester unseated Republican Conrad Burns last year with this message:

Recent trade agreements put our jobs and the viability of family farms and ranches across Montana in jeopardy by handing off trade advantage to foreign interests. Jon Tester will fight for Montana priorities in the U.S. Senate by standing firmly opposed to unfair trade agreements that hurt our communities and way of life. While Sen. Burns voted for tax giveaways to companies that outsource American jobs, Tester will protect American jobs in the U.S. Senate.

Tester stayed true to his promise by voting against the NAFTA expansion to Peru last year.

And you can bet that Daschle's spotty record on fair trade didn't help him any when the GOP ran a "social conservative" against him. If you want to set the record straight, check out on the real deal in Montana and elsewhere, check out our election report here.