It's no secret that America's food and beef safety system is highly problematic and inferior to that of many Asian and European nations. So it shouldn't be any surprise that our agribusiness companies - already responsible for the destruction of the Mexican peasantry via NAFTA - have their sights set on another "barrier to trade": strong consumer regulations.

In fact, that's precisely the target of the latest NAFTA-style trade deal with Korea, and the government there very nearly caved to U.S. pressure to allow U.S. beef into the country's famously high quality domestic beef market. The Korean people put the smackdown on that proposal, as the NYT reports (with their beautiful photo as well):

President Lee Myung-bak pledged a "new beginning" on Wednesday as he contemplated reorganizing his unpopular government, which has been shaken by the biggest anti-government demonstrations in two decades.

The demonstrations against Mr. Lee started six weeks ago when students began protesting 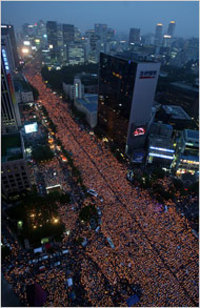 his government’s decision in April to resume imports of American beef despite widespread fears of mad cow disease. They grew into a broader backlash against Mr. Lee’s leadership style and his policies on everything from North Korea to education reform programs.

Speaking to a group of businessmen at his office, Mr. Lee gave his first comment on the massive rally against his four-month-old government that brought at least 100,000 people into the streets of Seoul on Tuesday and prompted his entire cabinet to offer to resign.

The beef protests have dealt a sharp blow to Mr. Lee, who was elected in December championing a new “pragmatic” approach to ties with Washington...

The agriculture minister, Chung Won-chun, visited the protest site to offer an apology in a speech, but protesters quickly surrounded him, chanting "Traitor!" and he was forced to leave.

Can you imagine this kind of outpouring in the U.S., and over food policy of all things! We don't get that kind of crowd for an anti-war march! Would we get that kinda crowd for health care?!

The insidious thing about NAFTA-style deals is that, not only do they open the borders to (in this case) unwanted products, but they also limit the ability of the government to regulate food properly. And if the government were to try to regulate, these deals give agribusiness firms the right to sue the government for taxpayer compensation, thus chilling better policy the next time. This actually happened when a group of Canadian cattlemen sued the U.S. when our government closed the border to beef trade when Canada had an instance of mad cow.