I've loved hearing the stories in recent days about all the righteous working class anger at Budweiser being bought out by the Belgian-Brazilian InBev company. Of course, many of the buy-outs and attempted buy-outs of the last few years stem from the overvalued dollar / trade deficit. If we're giving the world more cash as we consume their products, they've got to turn around and do something with the Benjamins. As it turns out, the acquisition of U.S. companies is one way to do it.

As a lover myself of smaller breweries of the kind profiled in Imbibe Magazine, I don't always have a lot of sympathy for the trials and travails of large corporate beer producers. But unlike Coors, both Bud and Miller are unionized, so hopefully the Bud sell-off will not result in any change in that. The Teamsters are sure to hold ImBev's fat to the fire on that one. 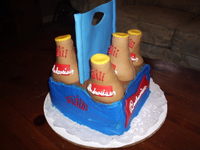 As with many other commodities and services, government efforts to keep beer production local, organic and/or union are seriously hindered by WTO (previously GATT) and NAFTA rules. Here's an NYT article from 1992:

The Canadians say the tax credits that many states offer companies, based on annual production of beer in the state, discriminate against them. The Anheuser-Busch Companies, controlling nearly half the beer market in the United States, for example, gets $21 million of annual tax savings from a brewery in Columbus, Ohio, the Canadians complained to GATT.

Canadian beer executives say a GATT panel has now ruled in favor of the Canadians. The ruling has not been made public, and officials of GATT and of the United States and Canada have declined to comment. If the reports are true, it would be the first time that American state laws were found in violation of international trade laws.

How could this happen? Here's Ruth Walick:

Because of its success in reducing world tariffs and preventing tariff wars, the GATT in the 1970s turned to nontariff barriers (NTBs). NTBs comprise an array of national laws, procedures, regulations, permits, standards and other government requirements. In the American federal system, many NTBs also result from the exercise of powers by state and local governments.

Since state and local governments are bound by the national Supremacy and Foreign Commerce Clauses of the Constitution, rulings by GATT dispute settlement bodies carry the potential for preemption of state and local government laws and regulations. For example, in a 1991 dispute settlement, a GATT panel upheld a Canadian complaint against a constitutionally sound Minnesota tax favoring small breweries (the so-called "Beer II" case), which effectively nullified the Minnesota tax.

As we rage on in Queens pubs about the Bud takeover, let's also look through our beer goggles at the root causes.