15 Italian police have been handed brutality convictions for their role in assaulting protestors at the 2001 G-8 global justice protests in Genoa, Italy. Police killed one Italian protestor, Carlo Giuliani, about whom more info is available here. According to the BBC:

Mark Covell was one of five British anti-globalisation protesters who was injured and has been seeking justice ever since. 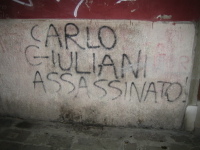 "This was not just giving a few hippies a slap around, this was systematic," Mr Covell said.

A journalist with alternative media organisation Indymedia at the time, he was present when police raided a high school where protesters were camping during the summit.

He was left with eight broken ribs, a shredded lung, a broken hand, 16 missing teeth and was in a coma for two days.

The anarchist hardcore punk band Conflict wrote a song about Carlo, posted below. It will not be to everyone's taste, but you can be outraged at the Italian cops' overreaction (and happy about the progress made today) even if you aren't doing the windmill.