Home Archives Subscribe Back to TradeWatch.org
Kwa: "Doha Collapse Won't Mean Suffering for The Poor"
The Punditocracy: Speaking for the Wretched of the Earth

James K. Galbraith is an advisor to the Obama campaign, a University of Texas professor of economics, and son of famous JFK advisor John Galbraith. He has a new book out called "The Predator State," and it is well worth a read. 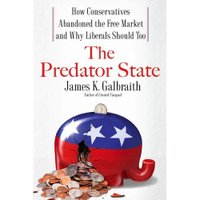 The primary goal of the book is not to talk politics, but to talk ideas. Like a lot of books over the last few years, "The Predator State" dissects the work of neo-liberals. Their packet of ideas, in Galbraith's reading, was to cut taxes, end inflation, and free the markets. While the original Reagan acolytes came to power on the appeal of ideas like "freedom", latter day Bushites have largely abandoned any serious commitment to them. Now, it is only so-called "liberals" who largely accept these ideas as the starting point for discussion.

Galbraith's criticisms of supply-side economics are many. How can we believe that markets are perfect, and also believe that there's insufficient savings? If we believe government should not intervene in markets, why is there such widespread support for the independence of the Federal Reserve, a government entity that sets prices? Why do we attribute many ideas to Adam Smith and David Ricardo that they never uttered? Are markets really that perfect if they reward failed capitalists at Enron and elsewhere? Small bore ideas from universal pre-K to job training receive targeted criticism: this is much too little for Galbraith, who wants liberals to - in the wake of Katrina and climate chaos - embrace his big ideas of economic planning.

The book's engaging, but it has some blind spots. Galbraith, an institutional economist, doesn't have a very institutionally-complex analysis of labor and other social movements, how they work, how they make decisions, and how they look at strategic usage of issues. To me at least, these questions are at least as interesting as the ideas themselves.

Instead, he spends dozens of pages in the book critiquing the fair trade movement. Why do fair traders blame trade agreements for job loss when it's really about national competitiveness? Why do fair traders yammer on about the trade deficit when it's really about finance? Why do fair traders waste so much time talking about labor standards in trade agreements rather than addressing labor standards writ large? Why do some criticize China when they should be embracing its industrial policies as our own? Why do we associate trade with inequality when Denmark has a lot of the former and not much of the latter?

I don't think he would find much opposition on these points from the more serious strategists and thinkers of the global justice movement. Like any other movement, we have our dilettantes, our ideologists, our lazy thinkers. If he scratched a little below the congressional press release level, he'd find many advocates talking directly about how the primary problem with trade pacts is not that they cost jobs, but that they shrink policy space, and pursue de-regulation by other means. He'd also find a lot of foundations, writers and large groups that guard their own institutional turf by not talking about the real issues.

Galbraith, in debates with Jeff Faux last year at the American Prospect that he turned into several chapters of the book, sought to deemphasize the politics of the trade issue. Hopefully the presidential campaigns are not doing the same. Nevertheless, this is a valuable read for many fair trade activists, who may not have many opportunities to read something by someone this left who happens to think their work is premised on fairy tales.

Our enormous trade deficit is rightly of growing concern to Americans. Since leading the global drive toward trade liberalization by signing the Global Agreement on Tariffs and Trade in 1947, America has been transformed from the weathiest nation on earth - its preeminent industrial power - into a skid row bum, literally begging the rest of the world for cash to keep us afloat. It's a disgusting spectacle. Our cumulative trade deficit since 1976, financed by a sell-off of American assets, is now approaching $9 trillion. What will happen when those assets are depleted? Today's recession may be just a preview of what's to come.

Why? The American work force is the most productive on earth. Our product quality, though it may have fallen short at one time, is now on a par with the Japanese. Our workers have labored tirelessly to improve our competitiveness. Yet our deficit continues to grow. Our median wages and net worth have declined for decades. Our debt has soared.

Clearly, there is something amiss with "free trade." The concept of free trade is rooted in Ricardo's principle of comparative advantage. In 1817 Ricardo hypothesized that every nation benefits when it trades what it makes best for products made best by other nations. On the surface, it seems to make sense. But is it possible that this theory is flawed in some way? Is there something that Ricardo didn't consider?

At this point, I should introduce myself. I am author of a book titled "Five Short Blasts: A New Economic Theory Exposes The Fatal Flaw in Globalization and Its Consequences for America." My theory is that, as population density rises beyond some optimum level, per capita consumption begins to decline. This occurs because, as people are forced to crowd together and conserve space, it becomes ever more impractical to own many products. Falling per capita consumption, in the face of rising productivity (per capita output, which always rises), inevitably yields rising unemployment and poverty.

This theory has huge ramifications for U.S. policy toward population management (especially immigration policy) and trade. The implications for population policy may be obvious, but why trade? It's because these effects of an excessive population density - rising unemployment and poverty - are actually imported when we attempt to engage in free trade in manufactured goods with a nation that is much more densely populated. Our economies combine. The work of manufacturing is spread evenly across the combined labor force. But, while the more densely populated nation gets free access to a healthy market, all we get in return is access to a market emaciated by over-crowding and low per capita consumption. The result is an automatic, irreversible trade deficit and loss of jobs, tantamount to economic suicide.

One need look no further than the U.S.'s trade data for proof of this effect. Using 2006 data, an in-depth analysis reveals that, of our top twenty per capita trade deficits in manufactured goods (the trade deficit divided by the population of the country in question), eighteen are with nations much more densely populated than our own. Even more revealing, if the nations of the world are divided equally around the median population density, the U.S. had a trade surplus in manufactured goods of $17 billion with the half of nations below the median population density. With the half above the median, we had a $480 billion deficit!

Our trade deficit with China is getting all of the attention these days. But, when expressed in per capita terms, our deficit with China in manufactured goods is rather unremarkable - nineteenth on the list. Our per capita deficit with other nations such as Japan, Germany, Mexico, Korea and others (all much more densely populated than the U.S.) is worse. In fact, our largest per capita trade deficit in manufactured goods is with Ireland, a nation twice as densely populated as the U.S. Our per capita deficit with Ireland is twenty-five times worse than China's. My point is not that our deficit with China isn't a problem, but rather that it's exactly what we should have expected when we suddenly applied a trade policy that was a proven failure around the world to a country with one sixth of the world's population.

If you‘re interested in learning more about this important new economic theory, then I invite you to visit my web site at OpenWindowPublishingCo.com where you can read the preface for free, join in the blog discussion and, of course, buy the book if you like. (It's also available at Amazon.com.)

Please forgive me for the somewhat spammish nature of the previous paragraph, but I don't know how else to inject this new theory into the debate about trade without drawing attention to the book that explains the theory.