Home Archives Subscribe Back to TradeWatch.org
GJ Euros Rocking the Party, and the Booze
Latest on the FTA with Republic of Damocles

Standing Firm and Shouting Down the FTA Push... & Its Wacky Backers 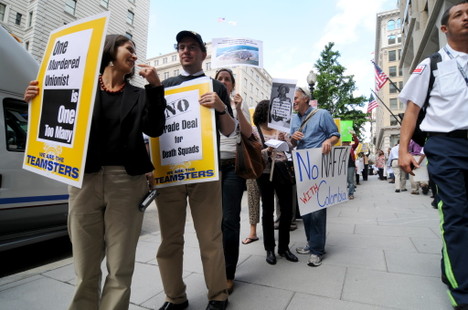 If you couldn't get too close to the corner of 14th and F today in DC, we apologize - sort of.

While Colombian President Alvaro Uribe took the podium at the National Press Club Luncheon to peddle more lies about the FTA, over a hundred human rights, labor rights, afro rights and environmental advocates picketed the entrance. Chanting down the human rights abuses in Colombia as only the beginning if a new NAFTA deal were enacted with the Colombian government, protesters made it very clear: No FTA, NO WAY!

But US labor leaders from the Teamsters and the Steelworkers were there to reaffirm their solidarity with Colombian unions and workers who are repressed and murdered for using their human rights. Afro-Colombian leaders denounced the conditions on the ground in their communities, and Uribe and friends' complicity in violently displacing and massacring Afro- and Indigenous Colombians in order to steal their land and resources. Human rights defenders condemned how more FTAs will displace peasant farmers, force migration and feed the armed conflict that has haunted Colombia during five decades. Environmentalists denounced the FTA's opening up the Amazon to investment by US companies whose reckless devastation of the planet's lungs is enough to make you gasp for air in advance.

We made it clear: the only ones to benefit from the US-Colombia FTA will be the the corporate elite and their paramilitary proxies who terrorize already impoverished people for their own profit.

There were about up to about 8 counter-protestors on site who apparenlty are ok with that. Some we recognized as Embassy staff, none of whom articulated anything positive about they expected from the FTA, simply insisting it was patriotic to blindly follow Uribe's lead. There were a few ruffians though, none of whom ruffled our feathers much.

But boy did they try. One of them, seemingly another member or staff to the Colombian delegation, we'll just call him El Agrofascista, must have just been so outraged at the site of so many labor, afro rights, environmental rights and humans rights leaders exercising free speech without targets on our foreheads that he went completely ballistic.

Sure he got in our faces and screamed unintelligibly, flipped us the bird, and looked like he was about to hit me, but its no biggie. Confronted with the angry right-winger, we just danced and smiled. Creation trumps destruction.I just hope if I ever encounter El Agrofascista again, its not on Colombian soil. If he's anything like his colleagues in the Uribe government, he's likely to have some friends that I'd rather not tangle with...

The AFL-CIO is out denouncing Uribe's pro-FTA deceptions as well. They are right on in continuing to oppose a vote on this horribly misguided policy, and for giving much doe kudos to Chairman George Miller for failing to actually convict human rights abusers, refuting the Colombians claims that they've implemented programs sufficient to address the problem.

But fair traders must remain vigilant. As Reuters reports:

[Ways and Means Chairman] Rangel said he would meet with Bush and Colombian President Alvaro Uribe at the White House on Saturday.

Whether Congress returns and votes on any trade deal depends largely on whether Bush decides to "call us into a lame duck session," Rangel said.

"That doesn't mean we would have the votes" to approve the deals, he added.

I can recommend a book titled "HOW TO KILL A COUNTRY" co authored by Linda Weiss Elizabeth Thurbon John Mathews(isbn 1741145856)it,s about Australia,s FTA with USA a more traitorous sellout of Australia,s national interests you couldn,t imagine!The agreement you speak of now would be in similar vein I am certain.The book is only 190 pages and addresses your concerns too,very succinctly and intelligently written please check it out.