Home Archives Subscribe Back to TradeWatch.org
The Eye Roll Felt Around the World
Who Needs Health and Environmental Protections Anyway? 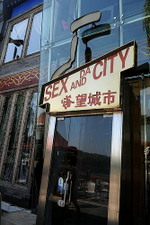 It's official. It's not just kids who are endangered by the China melamine scare, adults are now at risk too, in their most, uhm, adult activities.

According to Marie Claire magazine, Britain's novelty shop Ann Summers has had to pull some of its most popular edible sex toys off the shelf because they contain many times the allowable amount of melamine. The guilty culprit? A Chinese manufacturer named, wait for it, Le Bang. I think that is about as much juice as I can offer on a family-oriented blog like our own, so you'll have to go the original source if you want more details.

As we wrote last holiday season, one of the main reasons that corporations have offshored so much production to China in the WTO era is to avoid U.S.-style product liability laws. The NYT reports on how
this lack of product safety is affecting consumers within China:

The first sign of trouble was powder in the baby’s urine. Then there was blood. By the time the parents took their son to the hospital, he had no urine at all.

Kidney stones were the problem, doctors told the parents. The baby died on May 1 in the hospital, just two weeks after the first symptoms appeared. His name was Yi Kaixuan. He was 6 months old.

The parents filed a lawsuit on Monday in the arid northwest province of Gansu, where the family lives, asking for compensation from Sanlu Group, the maker of the powdered baby formula that Kaixuan had been drinking. It seemed like a clear-cut liability case; since last month, Sanlu has been at the center of China’s biggest contaminated food crisis in years. But as in two other courts dealing with related lawsuits, judges have so far declined to hear the case...

Chinese officials, under pressure to promote fast rates of economic growth and to enforce social stability, routinely favor producers over consumers. Product liability lawsuits remain difficult to file and harder still to win, especially if the company involved is state-owned or has close connections to the government...

“This is a product liability case that in a Western country would turn into a class-action lawsuit,” Professor Zhang said. In China, he said, “they don’t want to see so many people getting involved in one lawsuit. This might threaten social stability.”