Our statement on the Bush summit

Bush called for a global huddle on financial rules today, and here's what we had to say about it:

That President George W. Bush’s idea of a global plan “to avoid a repetition” of the 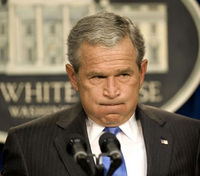 financial crisis spawned in large part by radical deregulation of financial services is to call a summit for nations “to strengthen the underpinnings of capitalism by discussing how they can enhance their commitment to open, competitive economies, as well as trade and investment liberalization” brings to mind Einstein’s definition of insanity: doing the same thing over and over and expecting a different result.

The White House today said that the Nov. 15 summit would advance a common understanding of the crisis’ causes and lead global leaders to agree “on a common set of principles for reform of regulatory and institutional regimes for the world's financial sectors.” Yet unless the radical financial services deregulation agenda that has been aggressively promoted and entrenched by the World Trade Organization (WTO), World Bank and International Monetary Fund is understood as a source of the current crisis, reform proposals will not address the crisis’ root causes.

The content of the Bush administration summit announcement suggests that trying to resuscitate the radical deregulatory agenda and the laissez faire ideology thoroughly discredited by this crisis is the primary objective of the summit, rather than a serious discussion of what new global governance and regulation is required.

While an extreme deregulation agenda had been pursued in the United States by various administrations, it was the WTO’s 1995 General Agreement on Trade in Services (GATS) and 1999 WTO Financial Services Agreement (FSA) that exported the radical deregulation agenda worldwide and locked it into place. Deregulation of the financial services sector - including banking, insurance, asset management, pension funds, securities, financial information and financial advisory services - has been among the most important but least discussed aspects of the WTO’s agenda since its inception.

For further detail, please see our backgrounder on the WTO’s role in the crisis at http://www.citizen.org/hot_issues/issue.cfm?ID=2044.