If the foundation of your house was sinking in torrential flooding, how would YOU fix it? Would you dig a hole on the back patio? What if the world was on fire? Would you want the firefighters playing with a wet book of matches during the shift change? Our outgoing president apparently would. 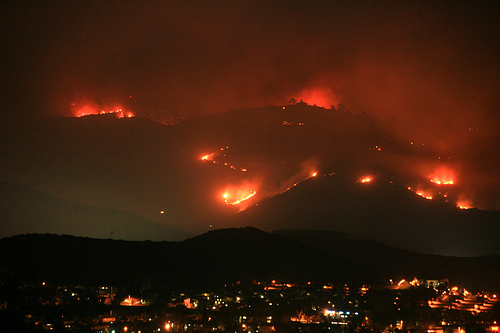 Last week Bush met for the first time with President-elect Obama at the White House. The meeting was designed to address the economic and financial crises sinking the entire global economy - caused in no small part due to the radical deregulating and liberalizing agenda of the WTO/NAFTA model. But reportedly, all Bush wanted to talk about was expanding that very same failed commercial model to Colombia, which even FTA proponents admit would have an insignificant effect - at best - on the overall US economy.

"During their private meeting, Bush said he could support some aid in exchange for approval of a free-trade agreement with Colombia, the Times said, citing unnamed people familiar with the discussion.

However, neither Obama nor Democrats in Congress -- who been blocking the trade pact -- seem willing to bend on Colombia, the Times wrote."

The Bush administration, perhaps feeling the heat for suggesting the popular idea of relief to US workers be conditioned on the discredited and widely unpopular idea of more failed NAFTA-type policies, denied this account. As AP reports:

"In no way did the president suggest that there was a quid pro quo," said White House press secretary Dana Perino. But, she added, "he did talk about the merits of free trade."

Newly named Chief of Staff for President-elect Obama, Rahm Emanuel, interestingly a long-time proponent of the Colombia FTA himself, has publicly rejected the idea of bartering bailouts for bad trade deals. As reported in The Hill, Emanuel issued a grim prognosis on the Sunday morning circuit for the Colombia FTA, who only hope of passage is in a lame duck session:

"You don't link those essential needs to some other trade deal," he said. "What you have to deal with is what's immediate here, and the lame duck is for immediate things that are important. That's what should be the focus, right now. There's an economic recovery package in front of the Congress. Washington should get it done."

So for those of you getting lost in these metaphors (and I could hardly blame you less), the world is ablaze from failed market fundamentalism, the Colombia FTA would add more of the same, but is nearly extinguished after a big fair trade realignment that has even Rahm Emanuel helping stop bad trade deals.

Despite all this, Bush still childishly, naively insists on playing with fire. We can try to say we told him so when he gets burned!