Hagan’s victory is particularly interesting, given her position on “social” issues. While Hagan was pro-choice, her relentless campaigning on fair-trade and other pocketbook issues allowed her to win over the socially conservative voters that dominate her state. In July 2008, Hagan released materials that slammed Dole for voting for CAFTA, and an October television ad showed an abandoned factory while a narrator said, “This is the legacy of Washington special interests: unfair trade deals, and Senator Elizabeth Dole giving tax breaks to corporations that send jobs overseas.”  On her campaign website, Hagan said,

“For too many years, however, trade deals have been written to pull down wages and working conditions in the U.S. and other developed countries, instead of pulling them up in the developing world. As corporate profits and CEO pay have soared, the incomes of ordinary North Carolinians have stagnated. Even in the best case, the pitfalls of trade are too apparent for Americans and for North Carolinians in particular. We need only look at once thriving communities built on the textile and apparel and furniture industries that are being devastated by low-cost competition from China and Mexico and other countries around the world… Our trade agreements need to include enforceable labor and environmental standards to prevent businesses from engaging in a race to the bottom by off-shoring their factories to newly opened markets with little or no environmental and labor protections.” 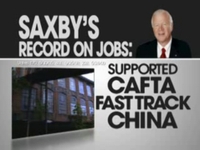 These included an early September 2008 ad paid for by the Democratic Senatorial Campaign Committee, where a narrator said: “Wicker and his special interest buddies back tax breaks for American companies that ship jobs overseas, and Wicker supports bad trade deals like NAFTA, Central America, and China – deals that send tens of thousands of jobs overseas. Ronnie Musgrove opposes these job killers, and he’ll fight to keep Mississippi jobs in Mississippi.”  An October ad for Martin focused on Chambliss’ support for CAFTA and Fast Track. In Georgia, Chambliss’ margin was only 3 percent in the first round of voting (, and in Kentucky, only 6 percent. In all three states including Mississippi, the fair-trade Democrat beat Obama’s margin – in Kentucky, by 11 points.

And as we detailed in our Fair Trade Gets an Upgrade report (PDF), fair traders won tough pick-ups in House seats in both the so-called “Deep South” (Alabama) and “Outer South” (Florida, North Carolina, and Virginia). And fair traders also defended seats in tough races in both “Deep” and “Outer” South (Georgia, Mississippi; and Kentucky, Texas).

These victories defied some pundits’ suggestions that Democrats should “whistle past Dixie.” In 2006, for instance, political scientist Thomas Schaller said that Democrats could not win statewide seats in the South – even if they were socially conservative yet economically progressive. “Political candidates in all but a few isolated pockets of the South essentially must pass a values ‘litmus test’,” wrote Schaller in Whistling Past Dixie, who calls on Democrats to instead focus on western states. According to Schaller:

“[Some] think Democrats can bridge the cultural gap by emphasizing the destructive impacts of Republican economic policies. But it’s extraordinarily difficult for Democratic candidates to differentiate themselves sufficiently on economic policies to compensate for the built-in advantages Republicans enjoy on social issues, and post-NAFTA Democrats are having a hard time convincing many working-class voters that there is any meaningful differentiation at all. Besides, no matter how attractive their economic messaging may be, Democrats must first pass through the ‘cultural credentialing’ filter to get a full hearing from Southerners on economic policy. The best Democrats can do is hope for fate to drop in their laps a huge electoral windfall, like an economic collapse of such magnitude that it eliminates the culture filter… This is neither a workable long-term strategy nor a noble way to run a political party.”

Such claims about southern politics are highly debatable.

As journalist Bob Moser has written, polls show that half of America’s self-defined populists live in the South, and they are more skeptical of NAFTA-style trade deals than the national average. And while racial issues carry a significant weight in the region, racially inclusive “populists” such as Alabama’s governor “Big” Jim Folsom – along with polls that show opposition to busing dropped much more significantly (and to ultimately lower levels) in the South than in the North – complicate the picture. According to Moser:

“When Democrats devolved from the Great Society proponents of the 1960s to the free-trading welfare reformers of the ‘90s, they lost their identity as the ‘people’s party’ in the process… When Democrats fret about having to compromise their party’s soul to win down south, they are fretting only about identity politics. Democrats would certainly not have to move right on social safety-net issues to win Dixie. They would need to move left, in fact, on issues like health care, corporate regulations and taxation, and antipoverty initiatives. On these issues, the very Democrats who fear the dark consequences of ‘looking south’ have already sold down the river man of the principles the party once held dear. Democrats as champions of unfettered free trade? Democrats reluctant to fight against the outsourcing of manufacturing jobs? … These are hardly the characteristics of a party of such high-flown nobility that it cannot risk contamination by contact with Southerners.”

Indeed, Democratic presidential candidates’ problems in the south over the last 30 years may have more to do with the fact that they compromise on pocketbook issues once in power (think Carter’s expansion of the General Agreement on Trade and Tariffs [GATT] and Clinton’s NAFTA).

On some level, what Schaller describes are fundamental political problems that are not specific to the south: any party that has compromised its integrity on an issue in the past (as the Democrats did in 1993 with NAFTA) faces difficulties reestablishing their brand. And parties often benefit from events that they did not set in motion.

The social-scientific problem in evaluating Schaller’s claims is that it is impossible to run controlled experiments where a fair-trade message is run in the same socially conservative state both with and without a financial meltdown to see how much the cultural credentialing matters. All we can know is that, in at least a half dozen southern congressional races, it was overcome – both by Democratic fair-trade candidates that were socially conservative, and those like Kay Hagan that were less so. These new members will secure their economic-policy bonafides if they do not make a 1993-NAFTA-like compromise once in office. The 2008 Senate races show that no region is off limits to a fair-trade message.

NOTE: This post was largely excerpted from our 2008 report, Fair Trade Gets an Upgrade (PDF).

"while racial issues carry a significant weight in the region"

What the heck is that supposed to mean? It's just left hanging in the air, without documentation or reference, to imply that in the South we're voting on racially charged issues? It's just not happening.

If you don't know your subject, it's dangerous to write about it. Bull Connor is dead... stop trying to stereotype the South into a mold from the 60's. THAT WAS ALMOST 50 YEARS AGO. Sheesh.

Bro, I'm a seventh generation southerner, with family in every southern state.

But you're right, "while racial issues carry a significant weight in the country" is just as appropriate.

This particular excerpt from my report is primarily a response to Schaller, with whom I obviously disagree, at least as it relates to congressional electoral politics.

Sorry for my over-the-top intro, but I agree with your article, and I want people to know how unpatriotic our free trade agreements are. Free trade is the root cause which ails our national economy, and to help with understanding that, watch these 2 videos:

Watch all of the 2nd video, espescially part 11. I know it has subtitles and is long, but it's very important. That's not my website and I'm sure you can find the videos another way, but I think those are 2 very important documentaries in concern to our current crisis.

Good luck, God bless, and pray for our country. It is in dire need of prayer, whatever your religion.

And if you think it is just low paying blue collar jobs being offshored due to free trade, read this bipartisan article about the outsourcing of white collar technical and medical jobs:

and this report about the off-shoring of our R&D (research & develpoment):

We are in serious trouble! Stop free trade!