Bush Grant of Medal of Freedom to Colombian President Uribe Is an Outrage Given his Government’s Links with Right-Wing Paramilitaries and the Growing Attacks on Colombian Unionists, Afro-Colombian and Indigenous People. 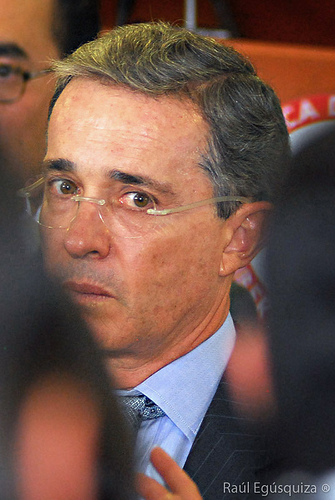 President Bush’s award of the Medal of Freedom to Colombian President Alvaro Uribe is outrageous and offensive given the Uribe administration’s horrific human rights abuses documented by the thousands of assassinated, attacked or displaced union, Afro-Colombian and indigenous leaders and given the administration’s deep links to murderous right-wing paramilitaries.

How could Bush award our nation’s highest civilian honor to the leader of a country with worldwide pariah status for its systematic crushing of the most basic human rights?

More than 460 unionists have been murdered in Colombia since Uribe took office in August 2002, including 43 in 2008 alone (an increase from 2007), even as Colombia faced scrutiny related to a trade agreement Bush negotiated with Uribe. Colombia has the world’s highest assassination rate for unionists.

In addition, the Uribe administration has worked consistently to undermine Afro-Colombians’ hard-won civil rights and territorial control. Systematic violence against Afro-Colombians and assassinations of their leaders continue unabated.

More than 200,000 indigenous citizens are being displaced annually. When asked about this, the U.S. ambassador to Colombia, William Brownfield said: “I do not challenge your figure. I have heard from enough sources - including government of Colombia sources - that the number of internally displaced people in Colombia is, in fact, continuing to rise,” according to a March 25 article in Roll Call’s CongressNow wire service.

In 2008, Colombian prosecutors ordered the arrest of Mario Uribe, the president’s cousin and closest political ally, who chaired the Colombian Senate and is accused of ties to paramilitary groups. Mario Uribe sought political asylum in the Costa Rican embassy in Bogotá, which denied his request as “inadmissible.” The Colombian Supreme Court has identified paramilitary ties to 65 current and former members of the Colombian Congress. Thirty-two lawmakers have been detained so far, with 26 of these from Uribe’s governing coalition. Thirty-three additional legislators are under investigation, including 29 from Uribe’s coalition. These include Nancy Gutierrez, a leader in Uribe’s political party who serves in a position equivalent to that of the speaker of the U.S. House of Representatives. To relate this to the U.S. context, it would be as if the president, Senate majority leader and House speaker were all simultaneously convicted or under investigation for ties to terrorist groups.

Actually, it makes perfect sense to award Uribe the Medal of Freedom if you adopt the psychotic, willfully blind logic of the wealthy few. Throughout history, aristocracies have without exeption believed or pretended that their own property interests were equivalent to the broder public interest. When Roman senators were threatened by land reform proposals, they reacted with violence and martial law. They jealously guarded the only freedom they cared about or recognized - their own. Plus ca change...