Home Archives Subscribe Back to TradeWatch.org
One step towards "No More Toxic Toys"
The American People is Ready for a Change with Buy America

GOP Senators are blocking confirmation of President Obama's Labor Secretary pick and fair trader Rep. Hilda Solis (D-Calif.). Seems like they'd prefer someone with no family background of actually laboring and no history of support for people who perform labor for a living - you know, people like them. 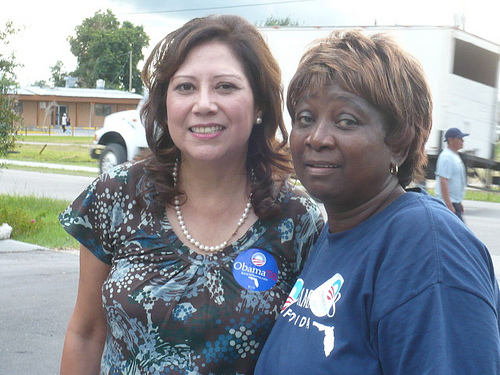 They say its another tax issue that's been dug up about Solis' husband, but here's the San Francisco Chronicle on the what are likely the real GOP objections:

Republicans on the committee have challenged Solis over her support for the Employee Free Choice Act, which would make it easier for workers to unionize. They also suggested that her position as an unpaid board member for the pro-labor group American Rights at Work amounted to a lobbying role, which Solis denies.

We should also note that those same GOP Senators might not be too jazzed that Solis has an almost 100% fair-trade voting record representing her California constituents. Just a hunch.


But labor leaders like John Sweeney and Andy Stern are coming to Solis' defense. Sweeney, President of the AFL-CIO, reiterated his support for Solis yesterday:

Congresswoman Hilda Solis is eminently qualified for this post, and will be a vigorous advocate for the kinds of programs that our nation is working people need the most. She will fight to improve skills development and job creation programs, including development of "green collar" jobs. She will work to assure that workers get the pay they have earned and that they work in safe, healthy, and fair workplaces. She is ready to address the retirement security crisis and will work hard to protect every worker from job discrimination, regardless of race, sex, veteran status, or disability.

She understands that working men and women deserve the freedom to choose whether to form a union without employer interference.

Stern, President of the Service Employees International Union, put out a video calling this obstruction "unacceptable."

We'll be watching closely as hearings over this fair-trade cabinet member-to-be develop.