I would have loved to have been a fly on the wall when President Obama - who ran as a fair trader - breached the the tiny matter of renegotiating the world's largest trading relationship with Canadian Prime Minister Stephen Harper - an unabashed anti-fair trader. 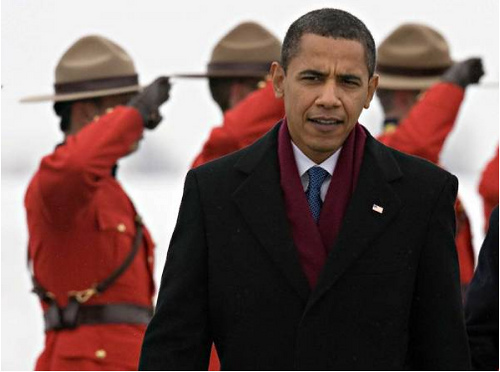 Seems like it would be hard not just to break the ice, but to bust through the inherent iciness of that setup. Not real quotes:

The meeting was certainly a loaded affair, with heavies on both sides of the border monitoring to ensure that NAFTA fixes that put working people first would stay on the agenda. The AFL-CIO and Canadian Labour Congress sent a joint letter to President Obama and Prime Minister Harper, which reminds the North American leaders that the world's largest trading relationship hasn't always worked for the majority of us:

The North America Free Trade Agreement (NAFTA) was sold on the promise that it would bring net benefits in more and better jobs and faster growth. While NAFTA did succeed in increasing trade and investment flows, it did not (and could not) have created more net trade related jobs in all three countries, and those jobs that were created were often less stable, with reduced pay and fewer benefits, than the largely unionized manufacturing jobs that were displaced. Income inequality grew in all three countries.

"You can't campaign ... repeatedly about how you are going to fix NAFTA and otherwise reform U.S. trade and globalization policy and then not do it," said Lori Wallach, director of Public Citizen's Global Trade Watch. "Everyone's going to be watching to see that he delivers on those promises."

And again in today's WP:

"I am happy for him to frame his way of positioning the issue any way he wants, as long as he actually delivers on the issue," said Lori Wallach, the director of Public Citizen's Global Trade Watch division. "If down the road Obama doesn't deliver on the policy, there will be a whole lot of really upset people."

We'll be watching to see what comes of the meeting, but preliminary reports show no sign of Obama caving on the weighty topic.