Where To Hide All This Colombian Drug Money...?

I've got just the place: the pockets of Panamanian and Colombian politicians!

Thats what David Murcia did, whose elaborate pyramid and money laundering scam left in the lurches at least 700,000 and as many as 3 million citizen investors. According to the New York Times, two of the three Bush hangover FTA countries are caught up in the mess: 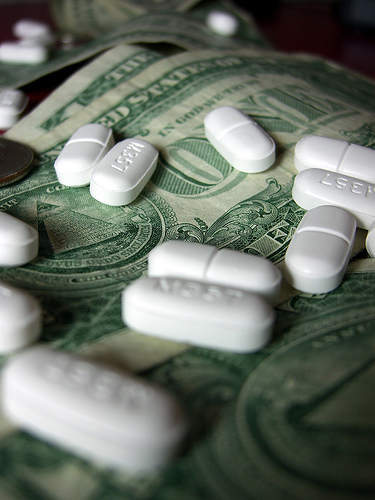 Mr. Murcia has been charged with creating a hydra-headed enterprise based in Panama that laundered money and enticed thousands of Colombians into a pyramid scheme known by his own initials, D.M.G.

Murcia might be about to get a slice of evidently-needed humble pie as he faces trial. Seems that the paw prints of narco-traffickers and Panamanian politicians and Colombian politicians - I know you're shocked - are all over his dirty money. We'll get to the Colombians tomorrow.

According to Colombian press La Patria (translated from Spanish) the authorities are starting to think this was much more than a your average pyramid scheme:

'It's not just the word on the street, statements in the media, by people linked to [DMG], above all its the investigation that points to the fact that this business had to do with narcotrafficking", stated the national Attorney General Mario Iguarán Arana.

This has been suspected for some time, though reporting prior to the new year, like this Washington Post's mention of the drug money, has been more in passing:

But investigators say it appears Murcia made money by buying electronic goods in bulk and selling them at high prices and by laundering drug profits.

Folks who watch the region won't be surprised that due to its banking secrecy laws that Colombian cartels - or Mexican ones for that matter - choose Panama as the site to hide their money. Maybe it shouldn't surprise us either that ruling party politicians are implicated in both Panama and Colombia. Panamanian press reeled when ruling party candidates got linked to the drug-money laundering pyramid scheme (from Spanish):

In an interview from La Picota prison in Colombia, Murcia mentioned to TVN Channel 2 the names of presidential candidate Balbina Herrera and her party-mate and capital city mayoral hopeful Roberto “Bobby” Velásquez and referred to other candidates.

The article in Post shows the scam as fairly obvious, so obvious you'd think that politicians with any sense would stay away - but not in Panama:

Those who joined "the DMG family" bought prepaid debit cards for any amount, cashed them in for appliances and recouped their money six months later.

Free appliances from nowhere? Sign me up! There couldn't be anything suspicious about that now could there? Might as well bankroll my campaign for high elected office with some of that cash, huh?

What should be abundantly clear is that the Bush administration saw no reason not to expand failed FTA policies to countries where political corruption runs high, human and labor rights trampled - both Colombia and Panama - and the rule of law is but a joke. Now all eyes will be on the Obama administration looking to see if it will work with Congress to change course and forge a truly new trade model.

We touched on this scandal in as part of number three in a roundup last November, but it got overshadowed at the time - appropriately so - by the fact that the U.N. was denouncing the Colombian military for executing civilians. Right now its resurfaced all over Panamanian and Colombian Press, and just starting to make its way to the U.S. media, who've already had their weeks' share of Caribbean financial scandal. We'll be sure to keep you posted as more is revealed.

You didn´t mention what is known in the region. there are also americans in this. all these tons of coke just don´t go to the us and dissapear. The drug lords in the US bank in Panama also.