AIG suing taxpayers for its own Panama tax dodging

Here's a story that will make your blood boil. AIG is suing U.S. taxpayers because it failed to evade as high a level of U.S. taxes as it wanted... in its Panama subsidiary. According to Lynnley Browning at the NYT:

While the American International Group comes under fire from C 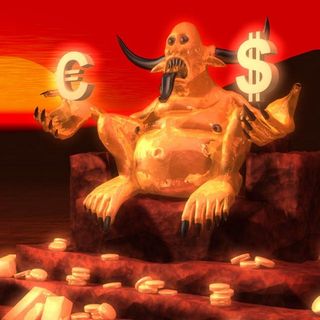 ongress over executive bonuses, it is quietly fighting the federal government for the return of $306 million in tax payments, some related to deals that were conducted through offshore tax havens...

A.I.G. is effectively suing its majority owner, the government, which has an 80 percent stake and has poured nearly $200 billion into the insurer in a bid to avert its collapse and avoid troubling the global financial markets. The company is in effect asking for even more money, in the form of tax refunds. The suit also suggests that A.I.G. is spending taxpayer money to pursue its case, something it is legally entitled to do. Its initial claim was denied by the Internal Revenue Service last year.

The lawsuit, filed on Feb. 27 in Federal District Court in Manhattan, details, among other things, certain tax-related dealings of the financial products unit, the once high-flying division that has been singled out for its role in A.I.G.’s financial crisis last fall. Other deals involved A.I.G. offshore entities whose function centers on executive compensation and include C. V. Starr & Company, a closely held concern controlled by Maurice R. Greenberg, A.I.G.’s former chairman, and the Starr International Company, a privately held enterprise incorporated in Panama, and commonly known as SICO....

A.I.G. says in part that it is entitled to a refund of $33 million that SICO paid in 1997 as compensation to employees, which it now says should be characterized as a deductible expense.

When U.S. multinationals operate in countries that, I dunno, actually require them to pay taxes and be regulated, then the U.S. Treasury gives them a "foreign tax credit." When they instead shelter income in tax havens like Panama, they can endlessly defer the repatriation of their income, and thus NEVER pay taxes, either at home or abroad. So an accounting challenge is to re-categorize as much of your Panama-hidden income as "expenses," so that they can be deducted if the mother company does repatriate the money. This appears to be AIG's game at the moment.

Under the Panama FTA, AIG-Panama would be able to sue the U.S. taxpayer for cash damages by claiming common regulatory actions were "tantamount" to an ("indirect") "expropriation." Do we really want to be giving these scoundrels more tools to evade their social obligations?

This is the most ludicrious preposterious subject I have ever heard of. The top Echelon of AIG, instead of sueing the taxpayers, should have never been bailed out and failed, then all jailed. WHAT RIGHT HAVE THEY GOT to have failed so many citizens, and then just steal what they want anyway. Their Lawyers should be in jail with them.

Any company should have two options when considering public money infusions...one, all tax loop-holes are closed until repaid in full; or two...don't take the money!!! Personally, I would have never given this company a dime...when are those we elected going to start coming up with some good ideas'?

Please bring David Sirota on board to write articles for your trade column. He authored "Hostile Takeover" explaining how the corporations are operating above the laws of all nations in their own virtual world. They wrote a get-out-of-jail card for themselves and are literally getting away with defrauding eveyone by floating above the law.

If possible, I would like to see book reviews on your web pages on this subject along with links so that we can buy on the spot. Help find the best authors on this subject. Regular folks need to be able to see behind the phoney wizard curtain from the view of the many good investigative writers. Help them make their books best sellers so that the subject can be on the map.