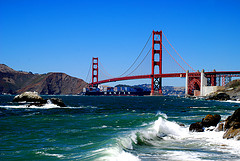 California, perhaps more than any other state, has seen first-hand how corporations can use trade rules to challenge domestic policies that have nothing to do with trade. California’s Attorney General’s office has already spent several years assisting with the federal defense of a NAFTA Chapter 11 investment case targeting a California ban on gasoline additive MTBE (settled in 2005). Today, California’s regulators are on the defensive again awaiting a decision on Canadian mining company Glamis Gold’s NAFTA Chapter 11 suit over the state’s mining regulations.

The proposed legislation, coauthored by State Senator Loni Hancock, recognizes that current trade agreements establish rules that could have implications for a host of legislative policy priorities, including state procurement policy. AB 1276 would make sure that in the future state legislators have a chance to review some of these potentially contricting trade rules and would require legislative approval before any state official commits California to comply with certain provisions of proposed trade agreements. Similar legislation has passed in Maryland, Rhode Island, Hawaii, and Minnesota.

Very good timing on this. It's also important to stop natural resource exploitation (and exports), such as timber and certain raw materials, no matter what the lobbyists say.