Home Archives Subscribe Back to TradeWatch.org
Are Multinationals Down With, or Down On, America?
Panama Denying Charity to Children? 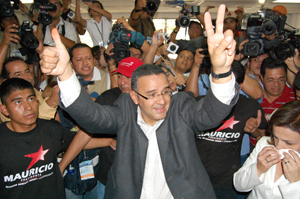 Funes, a dynamic speaker and political outsider who compares himself to President Obama and pledged to be an agent of change in the small Central American nation, was leading the polls late Sunday night with 51.2 percent of the vote and more than 90 percent of the ballots counted...

Funes's opponent, former National Police chief Rodrigo Ávila, who represented the Nationalist Republican Alliance (ARENA), was trailing with 48.7 percent of the vote. Ávila conceded defeat, telling supporters, "We will be a constructive opposition."

The Committee in Solidarity with the People of El Salvador (CISPES) is hopeful about the prospects for the country under the new government:

CISPES also wants to pass on a profound congratulations for the Salvadoran people, who today triumphed over fear and joined the countries of Latin America who are proving that indeed another world is not only possible, it is in formation!

This is really inspiring.