Home Archives Subscribe Back to TradeWatch.org
Two Opportunities to See Ha-Joon Chang in DC Tomorrow
Are Multinationals Down With, or Down On, America?

The Salvadoran fair-trade party FMLN (Frente Farabundo Marti de Liberacion Nacional) - vehement in its opposition to CAFTA - is leading the presidential race, but facing typical last-minute shenanigans from the right wing. And given the recent interventions by Republican congressmen - not unlike Bush administration's meddling in the CAFTA Referendum in Costa Rica - the FMLN is holding its breath. 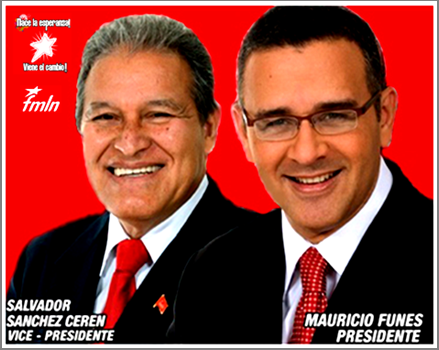 A recent Washington Post piece reveals that while polls show the fair-trade FMLN candidate Mauricio Funes up by 18 points on the CAFTA-fans and privatizers' candidate Rodrigo Ávila of the ruling ARENA party, there's always a chance that something will give.

The February polls show Funes up 49 percent to Ávila 's 31 percent, but Aguilar [a commentator] cautioned that the race remains dynamic. Other polling shows the race to be a virtual dead heat.

That something might just be the not-so-veiled threats made by GOP congressmen yesterday, orchestrated to dominate the Salvadoran headlines the final moments of the campaign. As highlighted by CISPES, the Committee in Solidarity with the People of El Salvador (who also urges you to take action to make the clear U.S. neutral position):

Rep. Dan Burton (R-IN) stated, “Those monies that are coming from here to there I am confident will be cut, and I hope the people of El Salvador are aware of that because it will have a tremendous impact on individuals and their economy.” Indeed, these threats carry considerable weight for Salvadoran voters, as 25% of the Salvadoran population lives in the U.S., and 20% of the nation's economy consists of remittances from those family members.

This sort of meddling was full anticipated, which is why Rep. Raul Grijalva (D-Ariz.) coauthored a letter signed by 33 members of Congress to the State Department, calling for a preemptive declaration of U.S. neutrality in the Salvadoran elections. Now we clearly see why this was necessary.

You can see Grijalva's press conference here, or below on yesterday's Democracy Now:

The Post reports on Funes' own reaction to the scare tactics:

During his speech in Metapan, Funes promised that "we will end the economy of privilege for the few," a reference to the so-called 14 major families of the Salvadoran elite, who have dominated the country for generations. He urged the crowd not to believe ARENA's "propaganda." "They're desperate because they know they're going to lose," he said. "If you vote for me, light is at the end of this tunnel."

Eyes on Trade will be watching and will keep our readers posted.