Panama-AIG Outrage On All Fronts

Anger is brimming over in diverse corridors over the Bush hangover agreement with Panama, and the new rights it would give to AIG-linked bodies in Panama to sue U.S. taxpayers.

Rep. Mike Michaud (D-Maine) just ran an op-ed in The Hill newspaper explaining what is at stake with the debate around the Panama FTA:

When the House Trade Working Group spoke with President Obama during the campaign, he 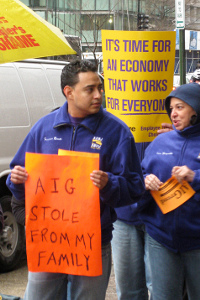 explained that if he was going to be the one responsible for enforcing a trade agreement, he wanted to be the one setting its terms. In the case of Panama, renegotiating the agreement is a necessary, but insufficient, step.

Removing the special investor rights and limits on Buy America and other non-trade policies is essential. But, no FTA should go into effect with Panama until that country eliminates its excessive banking secrecy practices, re-regulates its financial sector and forces banks and multinational subsidiaries to pay their fair share of taxes.

Indeed, the grassroots is pretty peeved about the whole discussion of this deal. Over the last 24 hours, 9,000 letters were sent to Congress to complain about the AIG-Panama scandal that we reported on last week. You too can let Congress know how you feel about AIG pushing a NAFTA-style deal with Panama, by clicking here.

It sounds like Congress is hearing this outrage, with Chairman Charles Rangel (D-N.Y.) of the House Ways & Means Committee putting out a press release yesterday that says:

“As I have discussed with the Government of Panama and the U.S. Ambassador to Panama, there are remaining outstanding issues that need to be addressed and actions that need to be taken by Panama before Congress considers the FTA.  These include specific actions to meet ILO labor standards and resolution of the tax haven issue now being discussed by our two governments. I hope these actions will be taken soon.”

We should let Congress know that we must also fix the underlying problems with the agreement, such as the provisions granting AIG-linked corporations the right to sue U.S. taxpayers for even more money.