As we contemplate how to further a global or hemispheric movement for social justice - on the heels of the People's Summit and the Summit of the Americas - we must take a moment to reflect on the brave allies in Latin America and the Caribbean who lay their bodies on the line to stop the corporations who exploit and destroy across the globe - when we blog from offices atop Capitol Hill. 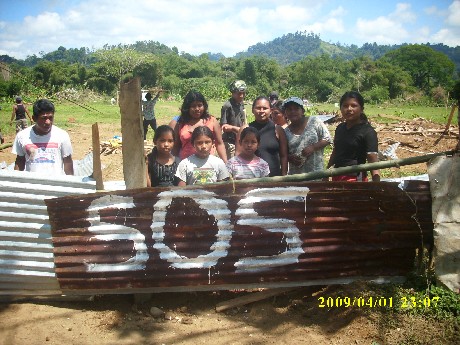 In Panama, where a leftover Bush FTA is pending, indigenous peoples fight daily to have their rights respected - while their government and some in ours spend their energies expanding rights of the already privileged investors and corporations, via a Bush-style FTA.

The indigenous rights advocacy organization Cultural Survival is drawing attention to - and soliciting your actions in solidarity with - the struggle of the Naso and Ngöbe indigenous peoples against construction of hydroelectric dams that would bring profit for corporations and peril for the areas' inhabitants.

On March 30, more than a hundred Panamanian police officers in riot gear leveled a Naso village in response to a peaceful protest by Naso and Ngöbe villagers who oppose hydroelectric dams that threaten their homelands. Hundreds of people were left homeless and destitute...

The government has said it will only give people materials to rebuild if they promise to move away from their territories, which the government considers to be "invaded lands."

For centuries the Ngöbe people have lived by the rivers in the remote hills of western Panama, but now the government of Panama sees profit in those rivers, and they have given concessions to subsidiaries of the American company AES to build a series of large hydroelectric dams.

It should be pretty obvious that a true change in trade and globalization policy would grant greater rights and protections to the Naso and Ngöbe, NOT to the very corporations that go after the lands of indigenous or Afro-descendants.

Its on us to keep pushing for fair trade, by calling or clicking or writing hand-written letters even. Contacting our Congresspeople to have them oppose the leftover Bush FTAs is really the least we can do.