Last Thursday, California, yet again, proved itself to be a laboratory of innovation, by becoming the first state in the nation to require low-carbon fuels.

The California Air Resources Board voted 9-1 to approve the standards, which are expected to create a new market for alternative fuels and could serve as a template for a national policy that has been advocated by President Barack Obama and Democrats in Congress.

California state legislator Fran Pavley led the fight to reduce emissions in California by introducing the Global Warming Solutions Act (AB 32) which Governor Schwarzenegger signed into law in 2006. However, the Bush administration stalled implementation of this legislation with a variety of obstacles and it wasn’t until January 2009 that California was given the green light to fully implement the Global Warming Solutions Act.

Now…even after California has cleared the Bush preemption hurdles, officials may have to fight against backdoor international preemption of some of these landmark regulations! 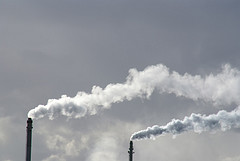 International Business Times reports that Canadian trade lawyers are beginning to grumble about these new environmental measures possibly violating NAFTA and the WTO.

The measures to slash such emissions would force refiners to consider the carbon footprint of the fuels they produce, a potential blow to synthetic crude upgraded from Alberta's oil sands, whose production emits more carbon-dioxide than conventional oil.

"There's definitely a NAFTA case and a WTO case. There's no doubt in my mind about it," said Simon Potter, a partner at the McCarthy Tetrault law firm whose practice includes trade and competition law.

If a Canadian company were to, as Potter hints, file a NAFTA case, it would be the third major NAFTA investor case launched against California environmental regulations. The first major suit was in response to California’s ban on a harmful gasoline additive MBTE that was leeching into the water system. After five years, the case was finally settled with California’s ban intact. The California Attorney General’s office is yet again helping the federal government fend off a suit brought by Canadian mining company Glamis Gold over California’s mining regulations.

State legislators in California have objected in the past to the kind of backdoor preemption of state regulations encouraged in current trade agreements and have urged the federal government to consult with state legislatures about new trade commitments that could compromise states’ ability to regulate. This legislative session, Assembly Member Nancy Skinner introduced AB 1276 which would add more oversight to the process by which state commits to comply to certain provisions of future trade agreements.

I am definitely using this as on of my current events article for my international business class. The teacher has been praising NAFTA so often lately I've wanted to paint the walls with my brains.

Have you seen "Who Killed the Electric Car"? Great documentary about environmental innovation in California, and how it TOTALLY gets shut down.

Actually, it's not really great. It's mostly just sad.