Home Archives Subscribe Back to TradeWatch.org
What Would Cesar Chavez Do?
Days of Tax Dodging Thunder

When Congress and President Obama eliminated funding for a controversial NAFTA trucking program last month, the Mexican government, claiming this was a violation of NAFTA, responded by raising tariffs on a variety of U.S. goods. 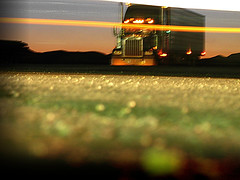 Under NAFTA, investors are given special rights and if they feel their ability to make profit has been compromised by a regulatory change, they are empowered under NAFTA to seek compensation directly from the trading partner country.

The tariffs are one way to compensate for all the U.S. subsidies that have gone into allowing these below market Mexican trucks to enter.

It is so depressing that even after both Democrats ran on renegotiating NAFTA, we haven't heard a peep out of Obama or Hillary on this issue. They should be dumping NAFTA right now, or at least threatening to if the Mexican government doesn't back off.

Its a shame Obama is just trying to please everybody at the expense of the American Middle class. When will he stand up for the American people that voted for a change.