According to the U.S. State Department, Panama has over 350,000 foreign-registered companies (i.e. mostly subsidiaries of foreign multinationals),  all of which face low to no taxes and regulation. This high rate of foreign incorporation – the country is reportedly second only to Hong Kong – makes the country a magnet for tax evasion.

In fact, many of the top 30 recipients of TARP money have subsidiaries in Panama. Because Panama 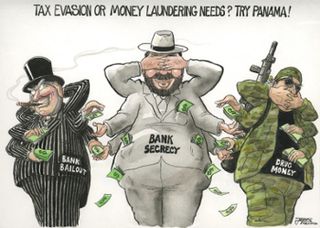 does not charge taxes on “offshore” subsidiaries, the TARP and other bailout fund recipients may be able to avoid paying significant amounts of U.S. taxes by essentially permanently deferring repatriation of their income in Panama. According to Securities and Exchange Commission (SEC) filings, Citigroup Inc. has a whopping 17 Panamanian subsidiaries, while American International Group, Morgan Stanley and American Express each have one.

How does any of this relate to the Bush-negotiated, NAFTA-style trade deal with Panama? Well, the FTA does not directly or indirectly remedy Panama’s problems with tax evasion and money laundering. There are no special requirements that take into consideration, much less try to counter, Panama’s banking secrecy rules, lax financial service regulations or designation as a venue for money laundering and tax evasion.

In today's Inside U.S. Trade, key trade and tax-transparency leaders had this to day:

Among the Democrats demanding a [U.S.-Panama tax information exchange agreement] TIEA as a precondition of the FTA is Rep. Lloyd Doggett (D-TX).


“[I]t is not only essential that they get an agreement signed, but that they change their laws,” he said. “Given their status as a tax abuser, I want to be sure that [Panamanian] laws have been changed, not just that the agreement is signed,” he said.


Doggett said that at a time when President Obama has called for action against companies that use tax havens and Treasury Secretary Tim Geithner has endorsed his legislation to help address the problem of tax havens, it would be a “real mistake” to reward “one of the most abusive tax havens.”


Doggett’s bill has a companion measure in the Senate sponsored by Sen. Carl Levin (D-MI), who is also opposing action on the Panama FTA before a TIEA is negotiated.


“A U.S.-Panama tax information exchange agreement is the least of what we should get before the free-trade agreement,” Sen. Levin said in a statement forwarded by his press office this week.

In fact, if the Panama FTA were adopted, it would make these matters of bipartisan concern worse. For instance, TARP recipients’ Panama-registered subsidiaries would be newly empowered to demand U.S. taxpayer-dollar damages for U.S. financial service regulations or limits on transfers (related to Panama’s status as a tax-haven country) that they could claim undermined its future expected profits and were thus ”tantamount” to (“indirect”) “expropriations.” These cases would be heard by UN or World Bank tribunals, and could be brought to attack domestic regulatory measures that would not be considered expropriations under the U.S. Constitution as interpreted by the U.S. Supreme Court. The effect of these excessive Panama FTA investor rights could be a watering down or chilling of much needed tax and financial-sector re-regulatory efforts.

So, perhaps unsurprisingly, the financial firms that created our current economic crisis are pushing hard for these benefits... even just days before AIG was bailed out.

Luckily, our new report details the easy fixes that could make the Panama FTA less objectionable:

Thanks for this precious information i really appropriate it.