Home Archives Subscribe Back to TradeWatch.org
Jake Tapper asks about Panama FTA, WH (and we) respond
New Book: How to Build a New U.S. Trade Consensus

Canadian mining company Pacific Rim Corp. has responded to grassroots efforts against its proposed mining project in El Salvador by filing a CAFTA investor suit against the Salvadoran government.

Communities in northern El Salvador, worried about the environmental impacts of proposed mining projects, campaigned vigorously along with environmental, religious and human rights organizations to hault what would be El Salvador's first large-scale mine in 70 years. They were successful in convincing President Tony Saca to rethink issuing the permit for Pacific Rim's El Dorado mine.

President Saca fears mining would cause cyanide contamination of water much in the way it did in the 1950s at the El Dorado mine, the same underground mine in the eastern region of Cabañas which Pacific Rim wants to reopen and expand.

''I won't give any mining exploitation permits because mining is definitively harmful,'' Saca said.

Saca's position has been echoed by his successor, president-elect Mauricio Funes, whose left-wing FMLN party ended 20 years of right-wing rule with their victory in the March elections. Funes will officially take power in June. 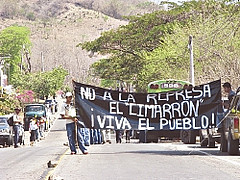 El Salvador is not alone in choosing to preserve natural resources over mining projects that do not bring long-term employment and whose profits will flow out of the country. And Pacific Rim is not alone in using NAFTA or CAFTA investor rights to challenge local decisions over mining. The United States is currently fending off a $50 million NAFTA investment suit over California's mining regulations.

Although Pacific Rim is a Canadian company that shouldn't even be eligible to utilize investor rights under CAFTA (an agreement between the United States and five Central American countries), they have found a way around this problem. Pacific Rim Mining Corp. will bring this investment suit through its Nevadan subsidiary, Pac Rim Cayman LLC! As with all NAFTA and CAFTA investor-state cases, the case will be decided outside of domestic courts by a panel of arbitrators.

And all this talk of a Panama FTA, which contains the same kind of investor rights found in NAFTA and CAFTA could makes matters much worse. Panama is home to an estimated 350,000 subsidiaries of foreign mulinational companies. Just as Canadian company Pacific Rim used its Nevadan subsidiary to file a CAFTA investor suit against El Salvador, so could any of the 350,000 parent companies use their Panamanian subsidiaries to take the United States government to task over environmental and other public interest regulations.

Speaking emotionally: I want to throttle all the central american powerbrokers, presidents and officials who voted in favour of the CAFTA-DR. Did none of them think of how any of this would realistically affect these central american countries!? this agreement was not, by any stretch of the imagination, formulated to actually mutually benefit ANY central american country. They (CA countries) cannot begin to compete with well establish US firms/companies. Of course its all a one way street. It boils my blood to think that Guatemala and El Salvador are getting totally screwed by these companies claiming indirect expropriation when, in particular, these two countries realised the environmental and economic impact (or loss) would have on them.

the central american countries need to end the CAFTA-DR now.