Home Archives Subscribe Back to TradeWatch.org
One Step Forward on Tax Havens, a Few Steps Back?
Jake Tapper asks about Panama FTA, WH (and we) respond

Join Us Thursday for a Live Discussion of a Mind-Blowing, Life-Changing Book

Friends, Readers, and all a yinz.

It's been years in the making, and it's finally arrived: the release of our new book this Thursday! Here are 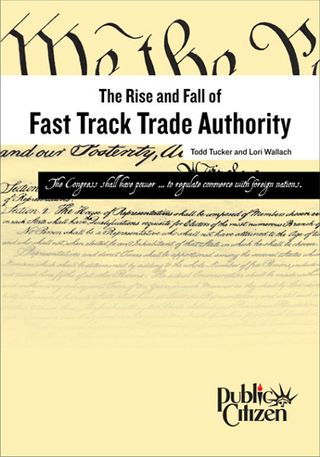 What: Book Release Event for "The Rise and Fall of Fast Track Trade Authority,"
Who: Authors Lori Wallach and Todd Tucker will speak; moderated by Barry Lynn, Senior Fellow at New America Foundation.
When: Thursday, May 7, 2009, 12:15 pm.
Where: New America Foundation, 1899 L Street, NW, 4th Floor, Washington, DC 20036
Why: Because you want to know about a much-needed new direction for trade policy
How: All's you got to do is RSVP right here.

More about the book:

The Rise and Fall of Fast Track Trade Authority is the first complete history of U.S. trade authority's evolution since the nation's founding. It shows how the balance of power between Congress and the executive branch has shifted regarding trade authority over the years.

Authors Tucker and Wallach explore how this perennial constitutional issue has been shaped over time by people you've heard about - like Hamilton, Nixon, and George W. Bush - and lots of people you probably haven't heard about. Unsurprisingly, Fast Track comes out as an historical anomaly. But some other lessons are less expected and can help shape a new trade authority mechanism that can replace Fast Track in the future.

The central message? Like our trade policy itself, Fast Track was not a random inevitability: things can be and have been done differently, and moving forward we must learn from the past. The book includes a new trade pact negotiating and approval process  to replace Fast Track that is more appropriate for today's expansive, complex international commercial agreements.

Praise for The Rise and Fall of Fast Track Trade Authority

"If you wonder why trade policy over the past several years has reflected such narrow interests, look no further than the imbalanced trade policymaking process that is Fast Track. There is no other legislative mechanism with such extraordinary powers. Read this informed and engaging account of Fast Track's history and take action." - Senator Sherrod Brown, Democrat of Ohio and congressional trade-policy leader

HOPE TO SEE YOU THERE!