New Book: How to Build a New U.S. Trade Consensus

We just released a book on "The Rise and Fall of Fast Track Trade Authority." It is available online at http://www.FastTrackHistory.org/ and at Amazon.Com if you prefer a Kindle download.

New Book: How to Build a New U.S. Trade Consensus 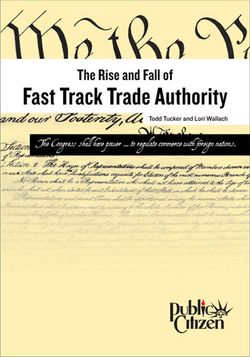 WASHINGTON, D.C. – A new book released today by Public Citizen examines the colorful 220-year U.S. history of how the president and Congress have grappled with negotiating and implementing trade agreements given the constitutional separation of powers requirements. “The Rise and Fall of Fast Track Trade Authority” by Todd Tucker and Lori Wallach concludes that Fast Track (the most recent mechanism Congress used to delegate its trade powers to the president) is a historical anomaly and counterproductive to the creation of good trade pacts.

“We wrote this book because when we did the research necessary to give ourselves a clear picture of Fast Track and the delegation systems before it, we found distorted, partial and inaccurate information in existing journalistic and scholarly work,” said Tucker, research director of Public Citizen’s Global Trade Watch division and a co-author of the book. “Much like the conventional wisdom on financial and trade deregulation, the prevailing narrative was that Fast Track was inevitable and necessary for the creation of trade agreements. We show that this is false and that, on the contrary, Americans have frequently changed the way that the executive and legislative branches have shared trade-policy powers.”

The book will be released today at an event at the New America Foundation in Washington, D.C. It will be available in a variety of easily readable formats accessible at FastTrackHistory.org. The research and publication of this material was made possible by a grant from the Alfred P. Sloan Foundation.

The book explores how the process of designing U.S. trade agreements has changed from 1789 to the present, examining five different regimes of trade-policy formation, the most recent culminating with the expiration of Fast Track during President George W. Bush’s second term.

Under the U.S. Constitution, Congress is responsible for crafting trade policy. Yet, over the past few decades, presidents have increasingly grabbed that power through Fast Track, which allows the executive branch to pick negotiating partners, determine trade pacts’ contents and even sign the deals – all before Congress gets a vote.

The book also notes that the trade agreements facilitated by Fast Track delve deeply into non-tariff, non-trade areas of policy such as investment, procurement and intellectual property. The book provides an unprecedented documentation of the arguments that motivated both opponents and proponents of the expansion of executive power over trade agreements. It is the result of a three-year scholarly investigation into hundreds of primary and secondary sources, many referenced in the book for the first time.

The book notes that growing numbers of voters and policymakers – including President Barack Obama and U.S. Trade Representative Ron Kirk – have opposed Fast Track and called for a more democratic process for creating a national globalization strategy.

“We look forward to a future new mechanism that can reduce political tension about trade policy and secure prosperity for the greatest number of Americans, while preserving the vital tenets of American democracy in the era of globalization,” said Wallach, director of Public Citizen’s Global Trade Watch division and a co-author of the new book. “Now is the time to have the debate about a new trade model, and this new book provides an essential starting point.”

Advance Praise for “The Rise and Fall of Fast Track Trade Authority”:

U.S. Sen. Sherrod Brown, Democrat of Ohio and congressional trade-policy leader
“If you wonder why trade policy over the past several years has reflected such narrow interests, look no further than the imbalanced trade policymaking process that is Fast Track. There is no other legislative mechanism with such extraordinary powers. Read this informed and engaging account of Fast Track’s history and take action.”

Alfred E. Eckes, eminent research professor in Contemporary History at Ohio University, author of “Opening America’s Market: U.S. Foreign Trade Policy Since 1776,” and former Reagan-appointed chairman and commissioner, U.S. International Trade Commission
“Candidates for federal office should be required to read and address the critical issues raised in this stimulating book. Wallach and Tucker make a persuasive case that the fast-track trade negotiating process produces agreements weighted to the interests of corporate giants and harmful to democratic governance and public safety. Their argument that a more democratic trade policy process is both possible and desirable merits the attention of public officials and thoughtful citizens everywhere.”

About the authors:
Lori Wallach is the director and founder of Public Citizen’s Global Trade Watch division and co-author of “Whose Trade Organization? A Comprehensive Guide to the WTO,” published by The New Press in 2004. One of the most widely cited trade and globalization policy experts, Wallach has testified before Congress, federal agencies and foreign legislatures. She graduated from Wellesley College and Harvard Law School.

Todd Tucker is research director of Public Citizen's Global Trade Watch (GTW) division. He is author of dozens of reports on the WTO, NAFTA, and various other consumer and economic issues. A graduate of George Washington University, he received his masters in development economics from Cambridge University.