Citigroup was birthed by the Clinton administration's financial deregulation proposals, and was most recently saved from total collapse by the Bush/ Obama administrations.

This is not a bank with an arms length relationship with government - in fact, so much not that Mexico may force Citigroup out of the country because of laws there against state-owned entities owning large banks like Banamex. (And, as if to prove that there's still no life beyond the nanny state, it seems that sources close to Citigroup are talking up the notion of further state assistance, this time via a NAFTA challenge.)

Apparently in Washington, having such a strong track record of dependence on taxpayer-funded policies like bailouts and trade pacts (not to mention government sign off for commercial banks to invest in toxic securities) does not disqualify you from funding a conference advising banks and other corporations how to get the guv'mint off your back.

Case in point. Last week, Citigroup helped put on the Global Services Summit here in DC. Many top corporations also lent a hand, such as Wal-Mart. Anyone willing to cough up at least $250 could go and be feted by the top brass in service-sector corporations and lobby groups, and enjoy a close personal audience with policymakers from around the globe. 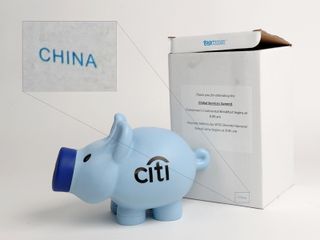 I decided to go and check things out, and not only because I love filet mignon kabobs, of which copious portions were served during the reception hour. (Oh, and did I mention the party favor that was handed out: the cutest, Made-in-China Citigroup pig bank?)

No, I was curious to see whether my taxpayer investment in Citigroup was helping them turn their act around, or whether they were simply pushing more race-to-the-bottom policies. Did Citigroup and their ilk tame their ambition to deregulate in the wake of the financial crisis? What I found was quite the opposite: corporate lobbyists and government officials busily exhorted one another to push expansion of the WTO, the rules of which explicitly require further financial services deregulation. Here's just some of what they had to say about their vision of the corporate-government partnership to push such controversial WTO rules:

Here was U.S. Trade Representative Ron Kirk: "We’ve got to work together. The great thing about your industry is you know you represent the future of the American economy. The challenge of your industry is about as royally diverse as you could imagine. And right now there’s not one common thread between law firms and insurance firms firms, Fed ex and so many others. One of our challenges to find the teamwork we need to advance the overall agenda of having a much more robust economy built around the services trade. We need to work together, have a common theme, and collaborate. It’s days like today that can help us get there. I want you to know we, at USTR, need and welcome your input."

Here was Pascal Lamy, director general of the WTO: "We will need to demonstrate that continued policy and regulatory reform in favour of services trade will be vital to supporting economic recovery. This may be clear to all of you attending this Summit, but you are the “converted”. The challenge is to take this message beyond these walls. ... The private sector has a key role to play. As the engines of growth and jobs, your active support and engagement is needed to restore global economic confidence. And one very obvious step that can be taken in this direction is the timely conclusion of the Doha Development Round. After all, you, as the private sector, will be the main beneficiaries of a new global trade deal. The WTO needs you to get involved in these negotiations, and to work even more closely with your governments on the specifics, so as to drive the Round towards completion."

Jeff Shafer, former U.S. financial services negotiator, is now Vice Chairman for Global Banking at Citigroup. He moderated a panel largely of other former negotiators who have gone to the private sector or corporate think tanks. He had this to say on his panel on the need to put pressure on the financial services negotiators to wrap up Doha: "Let me start off by saying that the real challenge here is how do we go through with this. This is the choir. Probably all of in this room believe that financial sector openness is a good thing. The question is: how do we do it?" Later, he added, "It is a challenge to get the financial people and the trade people both focused on this. It is going to be hard to bring them together but it’s not going to work if we don’t bring them together, both are true – we’re not going to get that focus without a sustained industry effort."

Here was Sergio Marchi, a former Canadian trade negotiator: "it’s no accident why the US private sector has been, not only so supportive of trade over the years, I would say has led and defined to a large degree the trade deals both globally, regionally and bilaterally. I think they need to re-find – along with businesses around the world – their voices on the trade debate once again. I think it also can’t be a domestic voice. They have to engage other business sectors in other capitals, particularly the multilateral capitals where decisions are being discussed and taken. At the end of the day, without the active engagement and prodding of a private sector, there will be no trade constituency, or certainly a much weaker one. I believe that, in this country, like mine, the business community is the real bridge between the public and the government."

I'll have more to say about the summit, and the specific deregulatory proposals advanced there, in a future post.