Home Archives Subscribe Back to TradeWatch.org
Killing Regs, Not Just Applying them Equally
The Stuff Nightmares Are Made of…

How NOT to Seek Higher Office

It's really hitting the fan for Congressman Kendrick Meek, the likely Democratic contender for the 2010 Florida Senate seat. Meek recently withdrew his cosponsorship from two key pieces of legislation for progressives: the Single Payer Health Care bill (HR 676), and the TRADE Act (HR 3012). 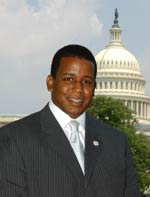 Congress Daily (Oct 23rd, 2009 - subscription only) reports on the fury Meek's flip-flop has unleashed on himself:

Labor unions are furious with Rep. Kendrick Meek, D-Fla., for his decision this week to withdraw his name from a bill rapidly gaining support among House Democrats to renegotiate or scrap several major trade agreements.

One labor source called it "spineless," and people familiar with the matter said some unions were threatening to withdraw support for Meek's 2010 Senate bid. "It's very disappointing, especially considering he's got a pretty good labor record," said Lisa Kinard, director of federal legislation and regulation for the Teamsters Union.

The Hill additionally notes Meek's "abrupt" and conspicuously-timed reversal on the two measures:

The Florida AFL-CIO endorsed Meek for the Senate at an Oct. 7 meeting, which Meek touted in a press release on Wednesday, the same day he changed his sponsorship.

Thea Lee, a lobbyist for the AFL-CIO, said her organization supports Michaud’s legislation and that Meek’s decision to drop his sponsorship would be a subject of discussions.

The fracas was a step backward for Meek after good news arrived late last week, when Rep. Corinne Brown, D-Fla., announced she would not challenge Meek for the nomination.

Congressman Meek's statement on the floor offered not so much as an attempt at an excuse as to why he would changes his mind, but his spokespeople sound an awful lot like the Chamber of Commerce misleading talking points against the TRADE Act.

Working people in Florida will have to watch Meek closely to see whether his actions side with them and for reform of our unsustainable job-wrecking economic model, or with the Chamber of Commerce business as usual.

(Disclosure: Global Trade Watch has no preference among candidates for elected office.)