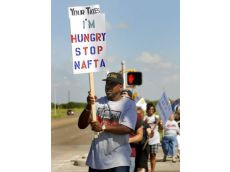 Up here in the Global Trade Watch field loft, we love a good picket line. This one, however, brings a special joy to our heart. Autoworkers from the UAW's Local 174 based in Romulus, Michigan made a trek down to Brownsville, TX to protest our broken NAFTA-style trade policies.


The Brownsville Herald Reports that the picketers denounced the greed that drives NAFTA-style globalization:

"We are losing our jobs on this side, and (American corporations) are paying workers low wages on the other," Local 174 UAW President John Zimmick said at the protest, wiping a sweaty brow. "Why can’t they pay workers what they are worth?

Its heartening to see these unionists take a 28 hour drive to stand in solidarity with their brothers and sister autoworkers, regardless of nationality. These UAW leaders and activists demanded better for auto employees in both the U.S. and in Mexico. The Herald continues:

This was the second demonstration staged by the group, which took to marching in front of the Hidalgo-Reynosa International Bridge Monday afternoon. At that time, workers also gathered at a street corner on the Mexican side of the bridge to protest what they said were unfair layoffs at a TRW Automotive maquiladora in Reynosa. TRW Automotive is a supplier for Ford Motor Co. and Chrysler.

"We want trade, but we want it to be just," said Martha Ojeda, executive director of the Coalition for Justice in the Maquiladoras, adding that the 600 TRW Automotive workers dismissed from their jobs did not receive severance pay or unemployment benefits as they would in the United States.

Couldn't have said it better ourselves. We need FAIR trade, just trade, like envisioned in the TRADE Act to rebuild our economy. That's why the TRADE Act is supported by nearly half the House Democrats and two Republican Representatives as well.