Ten years ago next month, 50,000 global activists shut down the WTO ministerial in Seattle. History was made when a devastating plan to expand the WTO's reign of corporate globalization was derailed. 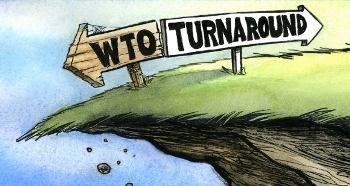 On November 30, 2009 - ten years to the day of the Seattle protests - trade ministers and their corporate allies will meet in Geneva to try once again to expand the WTO, in spite of the global economic disaster caused by their failed policies.

We aren't letting it happen. Instead, we're helping to launch the WTO Turnaround campaign to mobilize fair traders to keep the pirit of Seattle alive, and demand an end to the WTO's expansion of corporate rule that threatens workers, the environment, public health, sustainable development and democracy across the globe.

We at GTW are proud to join activists worldwide in demanding that the existing WTO regime be fundamentally transformed - shrunk or sunk, fixed or nixed - as go the slogans from protests past. The WTO Turnaround campaign features a petition drive, nationwide house parties and WTO-related movie screenings, speakers tours, as well as protests and vigils nationwide on the eve of the WTO ministerial in Geneva in late November.

The first push is an online petition drive. We're helping gather as many signatures as possible to let President Obama know we'll mobilize to support him acting on his campaign promises to push for fundamental change at the WTO. Over a thousand activists committed in the first hours of the campaign, and more are signing on every minute.

Visit the new site today to add your voice to theirs at the WTO Turnaround campaign site, and stay tuned to Eyes on Trade for all the latest on the much-needed WTO-Turnaround.

Do not expect Obama to help us in regards to fair trade and fighting the multi-national corporate WTO regime. He has put the multinationals in a place of power within his administration so on these issues he is much more an adversary than an ally.