Home Archives Subscribe Back to TradeWatch.org
Political spectrum agrees! WTO must change, for climate's sake
It’s 10 pm… do you know where your trade negotiators are?

Bringing home the Battle in Seattle

Recently, we told you about our WTO Turnaround campaign – an effort urging President Obama to turn around the WTO’s failed policies. Starting this week as part of that campaign, in retirement communities and universities, at birthday parties and union halls, activists across the country will be holding special WTO Turnaround House Parties to celebrate the 10th anniversary of the Seattle protests where 50,000 activists took to the streets of Seattle and shut down the WTO. 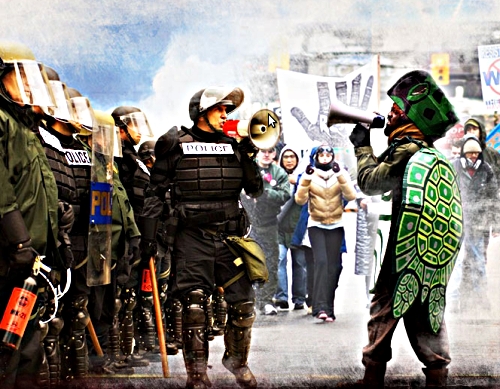 The House Parties include showing a bonus special edition DVD of the feature film Battle in Seattle with exciting Seattle protest footage and a short new documentary we helped the Steelworkers produce about the protests and ongoing efforts to turnaround the WTO.

If you think you can pull together 10 or more of your friends and family, coworkers, church group, or classmates for a house party or screening, let us know and we’ll send you the DVD. We’ll also get you an activist tool kit with postcards to the president so that your friends and neighbors can remind President Obama about his trade reform commitments and the incredible citizen victory that happened in Seattle 10 years ago. We think that anyone, from the students, family farmers, unionists, and tree-sitters who rallied in Seattle in ’99 to all of those who wished they were there, won’t want to miss this DVD.  Click here for more info.