TRADE Act at the Top!

2009 has been a great year for fair traders. We've seen an upgraded fair trade Congress take office, staved off the leftover Bush deals to expand NAFTA to South Korea, Panama, and Colombia, AND made major headway on flagship reform legislation, the TRADE Act. 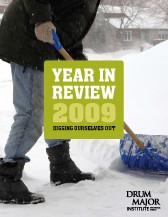 As if it weren't enough to have 133 Cosponsors in the House and 7 in the Senate, the Drum Major Institute - a progressive think tank - has named the TRADE Act one of the 10 Best Public Policies of the Year:

This year, Obama had the opportunity to make [his campaign platform's] vision of robust fair trade a reality with the Trade Reform, Accountability, Development and Employment (TRADE) Act. The bill, sponsored by Representative Mike Michaud, sets criteria for reevaluating NAFTA, the WTO, and other trade pacts in the light of urgent national concerns about food and product safety, environmental protection, labor standards, national security, and other issues impacted by trade...

...For setting forth a positive vision of globalization that favors the many, we ratify the TRADE Act as one of the best policies of 2009.

Thanks to the Drum Major Institute for recognizing the leadership and wisdom of the TRADE Act! It's exciting just to ponder what other accolades and milestones the TRADE Act might receive and rack up in 2010. We can't wait to see.