Home Archives Subscribe Back to TradeWatch.org
Huge Trade Deficit Comes Back from the Dead
Google It - Under Korea FTA, China Holds Your Data Privacy Future 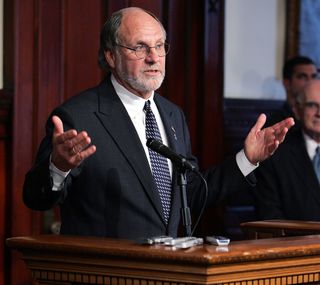 New Jersey Gov. Jon Corzine on Monday vetoed cutting-edge legislation that would have safeguarded job-creation programs, Buy America/Buy New Jersey procurement preferences and renewable source energy policies from being undermined by trade agreements. The Jobs, Trade and Democracy Act required a vote by the state Legislature before the state could be bound by federal government officials to conform state policies to the non-trade regulatory constraints imposed through certain trade agreements. The bill was designed to ensure that the practice and principles of American democracy, from federalism to checks and balances, are safeguarded in this era of globalization, Public Citizen said.

"Its hard to understand why Gov. Corzine would oppose the efforts of people in New Jersey as well as state and local officials nationwide who are demanding new accountability over federal trade negotiators so they do not negotiate away states abilities to create jobs using smart procurement policies and regulate health, energy and other services," said Lori Wallach, director of Public Citizens Global Trade Watch division. "How New Jersey chooses to spend its taxpayers dollars to pursue local economic development or design policies to make health care affordable should be decided by New Jersey citizens through their democratically elected Legislature with approval by their governor - not imposed top-down by foreign trade pacts."

The legislation (S. 1802), which passed the New Jersey General Assembly in May (61-13-3) and the state Senate in December (32-6), would have required state legislative approval of federal government requests in order for New Jersey to be bound to conform its policies to the non-tariff provisions of future trade agreements, including these agreements service sector, procurement and investment rules. Todays trade agreements have drastically expanded scopes, which include the imposition of new constraints on non-trade policies over which state and local governments traditionally have had jurisdiction, such as those affecting environmental protection, financial service regulation, land use and economic development, access to affordable healthcare and medicines, and more. State and local officials have increasingly become aware that todays trade agreements are invading the non-trade policy space reserved for state officials through an insidious sort of international pre-emption. Five other states - Hawaii, Maine, Maryland, Minnesota and Rhode Island - have recently enacted legislation similar to that which Corzine vetoed.

The New Jersey legislation was in part a response to past attempts by the U.S. Trade Representatives (USTR) office to obtain blanket sign-on from state governors to bind their states laws to comply with procurement policy constraints included in an array of trade agreements with several dozen countries - including agreements that had not yet been negotiated. Given that the setting of state procurement policy is typically a function of the legislative branch, the past practice of federal officials binding state procurement laws to comply with trade pact restrictions without consulting state legislatures has been highly controversial. During the Bush administration, the USTR also rebuffed state legislators requests simply to be given notice when the USTR requested that governors bind their states to trade pact procurement provisions.

"Gov. Corzine rejected the voters call for a new approach to trade policy by choosing not to reclaim from overreaching trade agreement requirements the ability to promote New Jerseys social, environmental and economic development goals," said Sarah Edelman, state and local program coordinator for Public Citizens Global Trade Watch division. "Creating new, orderly avenues for state legislatures to decide if and when their regulatory space will be constrained by U.S. trade policy would help ensure we can obtain the benefits of both a healthy federalist democracy and trade."

Since the passage of NAFTA and the WTO, the United States has seen its trade deficit balloon from less than $100 billion to $700 billion, five million manufacturing jobs sent offshore and median real wages remain flat - even as worker productivity has soared. Meanwhile, scores of domestic non-trade laws have been challenged before foreign tribunals established under the trade pacts, including state laws on zoning, toxics and mining.

To read the bill, go to http://www.njleg.state.nj.us/2008/Bills/S2000/1802_I1.PDF. To find out more about state and local governments actions regarding international trade agreements, go to http://www.citizen.org/trade/subfederal/.