Home Archives Subscribe Back to TradeWatch.org
Obama's Path Forward, or Bush's NAFTA for 'Nam?
New Blog on the Triple Crisis

A Year After Implementation of Peru Free Trade Agreement, U.S. and Peru Left with Broken Promises, No New Trade Model

On the one-year anniversary of the implementation of the U.S.-Peru Free Trade Agreement (FTA), it has become clear that the hopes and predictions of proponents of the trade deal have failed to materialize, Public Citizen said today. Instead, as critics of the deal had feared, environmental and labor conditions in Peru have deteriorated rapidly since the congressional passage of the FTA in late 2007 and implementation in early 2009. In a brief report released today, Public Citizen outlines some of the broken promises and labor and environmental problems.

The Peru FTA text included several reforms with respect to labor and environmental standards relative to the normal Bush trade pact model, which was based on the North American Free Trade Agreement (NAFTA) and the Central America Free Trade Agreement (CAFTA). These changes were added following a May 2007 deal between the Bush administration and some congressional Democrats. 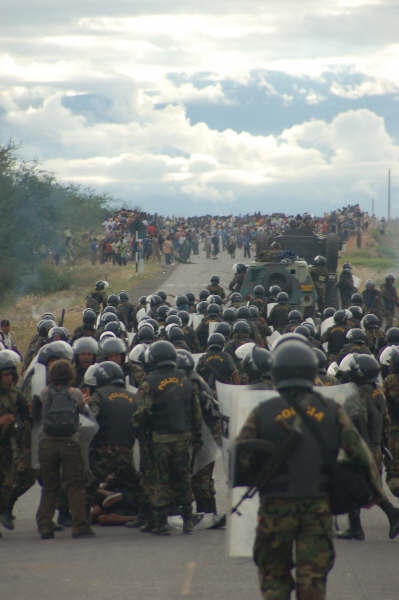 Despite the revised environmental language, the Peruvian government rolled back environmental protections existing prior to the FTA so as to implement the FTA’s foreign investor rights to access forestry, mining and other natural resource concessions. This included access to sensitive Amazonian territories over which indigenous communities had control under pre-FTA Peruvian law. In response to indigenous opposition, including road blocks in the remote northern Amazonia region of Bagua, the Peruvian government dispatched the military, and the resulting confrontation resulted in 34 fatalities – making the Peru FTA the first U.S. trade agreement to result in an immediate body count.

Despite the revised labor language, in Peru today under the FTA, Peruvian employers can use subcontracting and outsourcing legal loopholes that greatly limit workers’ ability to unionize; child labor and forced labor continue unabated.

“The initial outcomes of the Peru FTA’s implementation demonstrate that major reforms remain to be undertaken if a new American trade agreement model is to be created that can deliver broad benefits to people in the countries involved while protecting the environment,” said Lori Wallach, director of Public Citizen’s Global Trade Watch division.

Starting in 2008, the U.S. House Committee on Ways and Means Chairman Charlie Rangel (D-N.Y.) and Trade Subcommitee Chair Sandy Levin (D-Mich.) protested the Bush administration authorizing the FTA to go into effect despite the García administration failing to implement key labor and environmental reform commitments. A January 2009 letter from Rangel and Levin to Bush U.S. Trade Representative Susan Schwab noted that the García administration adopted new loopholes that could allow enhanced use of company subcontracting to crush unionization drives.

The Peruvian government’s true intentions became clear at a U.S. Chamber of Commerce victory event the
day the Peru FTA was signed into law, when Peruvian President Alan García told the audience of lobbyists for U.S. multinationals: “Come and open your factories in my country so we can sell your own products back to the U.S.” (U.S. Chamber Magazine, December 2007. Accessed July 13, 2009.)

Recent comments filed by unions and other civil society groups concerning the administration’s proposal to initiate Trans-Pacific Partnership (TPP) agreement negotiations focus strongly on the need for major reforms to be made to the trade agreement model used for the Peru FTA. TPP talks, which would include Peru, would provide the Obama administration with the opportunity to implement the president’s trade reform campaign commitments that included the issues unaddressed in the May 2007 deal, and to replace the current damaging Peru FTA text with a new trade pact model.