Fighting To Save Jobs in Evansville

Any minute now, the huge rally to save 1,100 good, family-supporting union manufacturing  jobs will begin. Brother Richard Trumka, president of the national AFL-CIO, will headline the event, along with other local labor and elected officials. 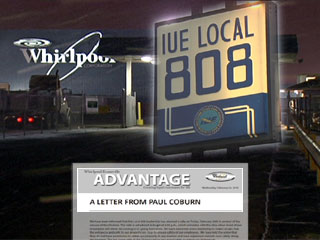 Trumka has and Oped in today's Evansville Courier & Press that shows the stakes:

After more than 50 years, Whirlpool is turning its back on Evansville — shipping hundreds of good local jobs to Mexico despite the company's healthy profits and millions of taxpayer dollars in federal economic stimulus money.

We need jobs. And we can't stop in Evansville.

We have to take the fight to every company that wants to cut out on America's workers, to the big banks that ruined our economy and to elected officials who refuse to stand up for working families.

When companies such as Whirlpool choose cheaper labor and lax environmental standards over America's workers, consumers and communities, we're going to let them know we won't stand for it.

There's a lot at stake, both nationally and here in Evansville.

Brother Trumka is right indeed. It's a national policy problem that requires a national policy solution. The fight is not just going on in Evansville, but in towns like Newton, Iowa and Galesburg, Illinois, and all throughout the country where good manufacturing jobs being are lost to lower wage countries like Mexico. Thanks to unfair policies like NAFTA, that's where the Whirlpool jobs will go thanks.

That's why we need to pass forward-looking reforms like the TRADE Act that allow for a sane manufacturing policy that creates good jobs right here in the U.S.

For more on the local buildup to today's rally, check out:

~ WFIE's coverage of the Whirlpool Corporation's threat letter to displaced workers who plan to participate in today's action, and ongoing protest preparations, or

~ The local Fox affiliate's continuing coverage of how the threat letter steeling the union's resolve, or

~ The Evansville Courier & Press Editorial expressing some limited solidarity with displaced workers marching against the 'recommendation' of their unfaithful boss:

Cobern [local Whirlpool manager] said in his letter that the decision to close the Evansville plant is final and will not be reconsidered....

In the meantime, allow these workers the freedom to express their frustration and disappointment at seeing their employer pack up for the trip to Mexico.

It has to hurt.

Hurt must barely begin to describe it. But here's hoping that pain will give way to anger at the unfair trade policies and corporate greed at the root of the problem/ Then that anger can transform into organizing to build another world in which the needs of normal hard-working women and men of the world come first!