Home Archives Subscribe Back to TradeWatch.org
Things USTR Should Give Up For Lent
Lori Wallach's In-Depth Interview with Joseph Stiglitz

The release of the 2009 trade flow data last Wednesday revealed that the trade deficit jumped significantly more than expected in December 2009.  The seasonally adjusted December deficit amounted to $40.2 billion; most experts expected a trade deficit of $35.8 billion. This deficit figure is for trade in goods and services combined - see the chart below for the trade deficit for goods alone. 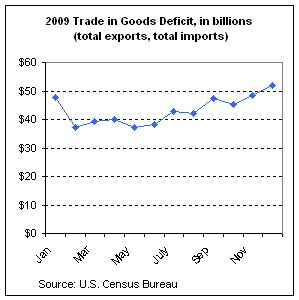 This will mean that the robust fourth quarter annualized 5.7 percent GDP growth estimates released at the end of January - based on projected December trade flows - will likely need to be revised in light of the new trade deficit numbers, in addition to revisions due to other factors. (Recall that trade flows are an important part of the calculation of GDP - the dollar value of exports is added to GDP, but the value of imports is subtracted.)

According to the AFP,

Most analysts predicted the December trade gap would reduce the gross domestic product (GDP) growth estimate for the fourth quarter, which is due for revision later this month.

The economy grew at a robust 5.7 percent annual pace in the final quarter, accelerating from 2.2 percent growth in the prior quarter after four quarters of contraction amid the worst recession in decades, officially begun in December 2007.

"It is true that the wider deficit will shave a couple of tenths off GDP growth, but it is hard to describe the trade figures as bad news, since they show a continuing robust rebound in world trade," said Nigel Gault, chief US economist at IHS Global Insight.

Its worth pointing out that the claim of the economist at HIS Global Insight that it is hard to describe the trade figures as bad news, since they show a continuing robust rebound in world trade, refers to the indication, given the trade data, that global demand for goods is rising and hence the global economic recovery is underway. A larger U.S. trade deficit is not good news for the U.S. economy, though, since it represents jobs that could have been created if our trade deficit was lower.

AP notes that "the export gains are expected to be outpaced by an even larger rebound in imports" in the coming months.

The first revision of the fourth quarter GDP estimate is due on February 26.