Home Archives Subscribe Back to TradeWatch.org
USTR Citing the Chamber of Commerce's Slanted Website?
Fighting To Save Jobs in Evansville

It can barely get greedier than this: We're in tough economic times, so Whirlpool receives $19 million in taxpayer funds to create jobs. Then it turns around and announces it will shutter its Evansville, Indiana refrigerator plant and displace the 1,100 workers there. Disgusting. 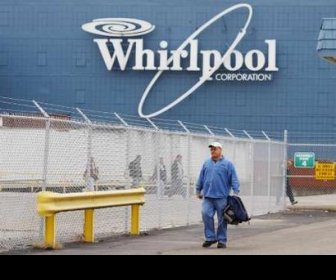 And where, you might ask, will those jobs go? They'll follow so many other lost family-supporting jobs on the NAFTA train to Mexico.

But workers are hoping to make the planned Evansville closing a turning point in the battle for American manufacturing, and are fighting to keep the plant open. The president of the national AFL-CIO, Richard Trumka, is scheduled to speak tomorrow at a major rally to keep plant open. Many hundreds are expected to join the demonstrations from across the region and the country.

We need to bring to the attention of the American public when a so-called - in my opinion - American company gets American tax dollars, $19 million American tax dollars to create jobs, then they should not be taking existing American jobs to Mexico or China... We need those jobs right here in this community.

Sister Reich is right. It's a long shot that the plant will stay open, but workers are rallying to a higher cause. Under the influence of unfair NAFTA/WTO-style trade policies, manufacturing job loss has hobbled the country's economic prospects. Working people in Evansville are fighting not just to keep the plant open, but also to change the policies of "taking these jobs to other countries."

That's why solutions like the TRADE Act that correct our failed trade policies, are a crucial element of this fight. Indiana Representatives Visclosky, Donnelly, and Carson have endorsed the comprehensive reform legislation, but 8th District Rep. Brad Ellsworth, who is expected to speak at the rally and whose hometown is Evansville, has yet to sign on. Hopefully he'll see the light and join the growing reform consensus.

Mobilization and protest are another critical element of the fight. So tomorrow - Friday, February 26th - working families will assemble in Evansville to say, enough!

The story of the Whirlpool closing and the massive protest is gaining traction. Bloggers like Sam Stein at Huffington Post are following the twists and turns, like Whirlpool's recent threats to workers who participate in the protest:

Activists planned a high-profile protest for this Friday, with AFL-CIO president Richard Trumka visiting the plant for the first time. But Whirlpool says the effort is futile -- they are fully committed to shutting the plant down. The company, however, still seems quite wary of the potential for bad publicity. In a memo sent to its employees and passed along to the Huffington Post, Paul Coburn, division vice president for Whirlpool's Evansville Division, offers a fairly explicit warning to his workers: If they join Trumka's protest they would seriously risk future employment opportunity.

Dave Johnson at the Campaign for America's Future points out the additional collateral damage to be caused by the closing:

Whirlpool knows that taxpayers will shoulder the unemployment and other costs. Closing a plant like this also means all the supplier, transportation and other third-party jobs go away...

There will be more home foreclosures, and local businesses are stressed or have to go out of business. Whirlpool is profiting from making all this someone else's problem.

Whirlpool is even playing nearby Iowa against Indiana, shaking the state down for millions to move just 60 of the 1,100 jobs there.

Letters to the editor are pouring into the local papers, again highlighting the devastating impact the closure will have on the entire community, not just the pink-slipped workers and their families:

As a university professor in Evansville, I am extremely concerned about the closure of the Whirlpool refrigerator plant here in our community...

Furthermore, the plant's closure means that many people from the local area will not have the means to finance their children's education. Fewer well-educated young people is a problem not just for the region but for the entire state. That's why I'll be at Friday's rally, urging Whirlpool to keep the plant open.

If you're anywhere in the Tri-State area, drop what you're doing and get yourself on down to Evansville to join brother Trumka, sister Reich and all the rest. The fight for sane manufacturing policy and a fair trade future for each and every Evansville needs you.

I'm glad to see at least one university professor (cited in article) gets it. There are a lot of academics and government employees who are very free trade. If the rest of our workforce is KOed for good, who will pay the tuition at universities or the taxes for government?

Still, one company can't do it on its own. The only solutions are either to say "you only get the government money if you keep the plant open" and/or "if you move overseas, you can't sell back here." Of course, either solution would violate the WTO, which makes me wonder why we haven't pulled out of the WTO already.

"If the rest of our workforce is KOed for good, who will pay the tuition at universities or the taxes for government?"

Heh - they don't give a rat's about the former, at least - there are plenty of rich foreigners out there to recruit. (I'm not joking - I know of some schools that are really cranking on this right now, even as their cost is making them out of reach to more and more Americans.)

I hate the Whirlpool just packed its bags for Mexico and is leaving so many people with out jobs.