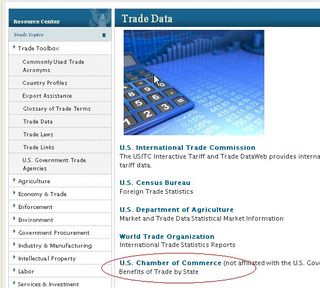 Given that the Chamber of Commerce is fiercely lobbying against the fairer trade model supported by President Obama and members of Congress (and against almost everything else the Obama administration is trying to achieve), it is shocking that the USTR’s webpage of links to trade data includes the Chamber of Commerce’s slanted “trade benefits” website. The USTR webpage lists all government agencies and then only the Chamber as sources of trade data – no unions, no universities, just the country’s main corporate lobby.

Did they miss the wonderful trade data resources of the Economic Policy Institute (EPI), the AFL-CIO, or our searchable Trade Adjustment Assistance database? Or, maybe the USTR staff just hasn’t had a chance to update the webpage in the 14 months since Bush left?—Actually, no, the page says that it was last updated on July 29, 2009.

On the other hand, maybe it’s not an oversight? While most of the administration is engaged in mortal combat with the Chamber, USTR Ron Kirk seems to be all warm and fuzzy toward the Chamber. Consider his comments at a speech there last year:

I couldn't think of a better, more welcoming environment than being right here at the Chamber….I was really excited about the opportunity to come and be with you today because -- I think I've got this thing figured out now, after 60 days; I've got it all down. But considering some of the audiences that I've been in over the last 60 days, I needed a little bit of home cooking, so to speak. So I feel like I'm very much preaching to the choir, and if so, please don't be offended.

This cuddly view of the Chamber is inconsistent with pursuing a new, fairer trade model, which the Chamber strongly opposes. Over half of Democrats in the House have endorsed this new vision for trade policy – by formally sponsoring the Trade Reform Accountability Development and Employment (TRADE) Act. (The Chamber has launched a campaign against the Democrats’ initiative.)

The Chamber of Commerce’s website purports to show the trade “benefits” for each state. The problem is that the Chamber’s website only covers states’ exports, as if the were not being swamped in a flood of job-killing imports.  Imports represent goods that American consumers and businesses have purchased from other countries that they could have purchased from manufacturers employing workers.

The Chamber’s website says virtually nothing about the harmful effects of our massive trade deficit that accrued since the Chamber’s beloved NAFTA, WTO and similar trade deals went into effect. (Indeed, our trade deficit increased from $25 billion in 1993 to $263 billion in 2009 with NAFTA countries alone.)  EPI estimated that if we had balanced trade with and , the economy could have supported about one million more jobs in 2004. Yup, the Chamber of Commerce site also makes no mention of the nearly 5 million manufacturing jobs that we've lost since NAFTA and WTO went into effect – that’s one out of every four manufacturing jobs.  Balanced trade could help businesses, but instead the large trade deficit is a significant drag on growth that is killing manufacturers and American jobs.

Plus, the Chamber dodges the wage stagnation that has plagued the during the era of Fast Track and NAFTA-WTO model trade deals. And it does not even get into all of the horrible import safety problems – tainted food, toys and more – or the trade tribunal attacks on key consumer, toxics and environmental law.

What is even stranger about the USTR linking to the Chamber  is that the Chamber has relentlessly attacked President Obama’s major policy priorities.  The Wall Street Journal has called the Chamber’s assault “the biggest undertaking in the Chamber's 100-year history.” Last year, the Chamber spent $140 million lobbying to prevent the administration from passing  health care reform, financial sector reregulation, and climate change legislation.

Instead of heaping praise on an organization that is attacking his boss’ goals and citing the Chamber as a reliable source of trade information, perhaps USTR Kirk could achieve more progress by  advancing the new trade model that so many members of Congress have endorsed.