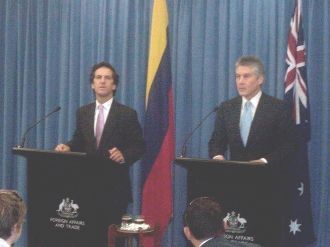 In Australia last week, the Office of the U.S. Trade Representative (USTR) participated in the first round of the talks of the Obama administration for the Trans-Pacific Partnership (TPP) agreement (the Bush administration already had three rounds of talks in 2008 with Chile, New Zealand, Brunei, and Singapore before the TPP process expanded to include Australia, Peru, and Vietnam). The USTR revealed little about what was discussed last week in its statement announcing the conclusion of this round of talks, but there was one intriguing bit of information that flew under the radar of most of the news media covering the TPP talks.  The Foreign Minister of Colombia, Jaime Bermudez, was in from Wednesday to Saturday of last week for meetings with Australian officials.  The Australian Minister for Foreign Affairs, Stephen Smith, hinted that could join the TPP process in a joint press conference with Bermudez:

But the other important matter we discussed, and the [Foreign] Minister [of Colombia, Jaime Bermudez,] will have a conversation, a detailed conversation with [Australian Minister for Trade] Simon Crean about this, of course we saw this week, a very important trade Asia Pacific initiative, with the start of the Trans Pacific Partnership discussions.

Currently we have four members of the TPP, we now have eight countries involved in those discussions. The [Foreign] Minister [of ] is going to have a detailed discussion with Simon Crean, but of course there is also some rationale, given that in the TPP we find a member, , one of the negotiating eight. There is a rationale for also putting itself forward in due course for that, and we're looking forward to a good conversation between Simon Crean and the Minister on that front as well.

The possible entry of into the TPP illustrates the unprecedented nature of the TPP.  The TPP negotiating partners, including the USTR, envision structuring the TPP so that countries could join the agreement more or less at will after its implementation.  According to a December 15, 2009 article in Inside U.S. Trade, the USTR already “has extended an invitation” to , , and to join the TPP before or after talks conclude.

The potential for expanding the TPP to include more countries after the agreement is finalized creates huge concerns about its impact on democracy and sovereignty.  Congress has already told the USTR that must address concerns about its very poor human and labor rights record (among other issues) before the Colombia FTA can be reconsidered.  Could an automatic expansion process in the TPP bind the to a trade agreement with without Congress ever voting on it?  What about a trade agreement with or ?

If there will be a possibility of allowing countries into the TPP after it is implemented, the USTR must ensure that the approval process for any new proposed TPP partners is exactly the same as it is for a new trade agreement outside of the TPP, including a vote on the floors of the House and Senate.  The TPP should also include a democracy clause that would require TPP parties to have democratic forms of government so that we do not have a repeat of the Honduras-CAFTA debacle of last year. Otherwise, the TPP could take us down a dangerous road where we could be stuck with trade agreements with some very unsavory governments.