It's a Family Affair for Death Squad President 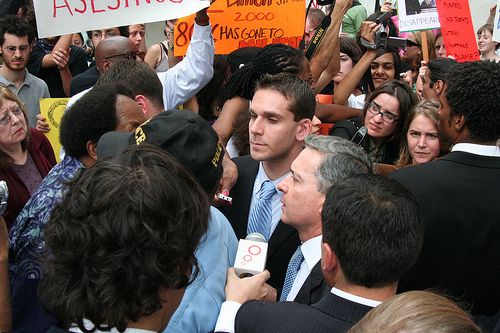 The Post brings us up to speed and drops the new bomb:

But Uribe's government has also been tarnished by scandals, including accusations in congressional hearings that death squads hatched plots at his ranch in the 1980s and revelations that the secret police under his control spied on political opponents and helped kill leftist activists.

Now a former police major, Juan Carlos Meneses, has alleged that Uribe's younger brother, Santiago Uribe, led a fearsome paramilitary group in the 1990s in this northern town that killed petty thieves, guerrilla sympathizers and suspected subversives. In an interview with The Washington Post, Meneses said the group's hit men trained at La Carolina, where the Uribe family ran an agro-business in the early 1990s.

Regular EOT readers will not be surprised that Uribe's death squad links continue to surface. But the most recent incidents of death threats shocked even me. As Dan Kovalik notes on the HuffPo:

On May 13, 2010, staff from the Washington Office on Latin America ("WOLA"), a D.C.-based human rights organization, met with long-time Colombian Ambassador Carolina Barco at the Colombian Embassy in Washington. At this meeting, WOLA staff, including Gimena Sanchez, expressed their concern for the safety of a number of its human rights partners in Colombia who, in the words of WOLA, have been victimized by "threats, sabotage of activities and baseless prosecutions." WOLA is taking the threats against its partners very seriously as a number of leaders from social groups, particularly from Afro-Colombian and Indigenous groups, have been killed in recent months.

On May 14, the very next day, WOLA received a death threat directed to itself as well as 80 other Colombian human rights, Afro-Colombian, Indigenous, internally displaced and labor rights organizations and individuals. See, WOLA Press Statement. This threat, from the Colombian paramilitary group known as "The Black Eagles," stated: "as so called human rights defenders don't think you can hide behind the offices of the Attorney General or other institutions . . . we are watching you and you can consider yourselves dead." As WOLA noted in an open letter dated May 17, The Black Eagles go "on to falsely accuse the listed organizations of having links to the FARC guerillas and as such declaring themselves military targets."

If this doesn't suggest that the Colombian diplomatic and government structure in corrupted to the core, I don't know what does. Such a brazen threat against a U.S. based human rights group suggests  paramilitary armed groups are feel emboldened, not restricted, under Uribe's so-called 'Anti-Democratic InSecurity" policy.

As Uribe leaves office he loses institutional power and teflon political veneer. It makes you wonder what other evidence of Uribe's linkages to human rights atrocities will surface, and if he'll ever see his day in court. It also makes you wonder what why some in Congress could see anything but continued human rights tragedy resulting from ratifying a failed trade policy with a country where links to atrocities already run straight to the top.

(Hat tip to, and a single tear for, maestro photographer and former GTW staff, Brandon Wu. The photo credit - his first EOT hit since moving on toward grad school - is all his)

And the NSA, etc. don't know this? If this was happening in Venezuela, Hillary would be putting the verbal boot into Chavez. So why is she still "best friends" with Uribe?