Home Archives Subscribe Back to TradeWatch.org
In Which GATS Gang Calls Each Other and Decides GATS Gang Not a Problem
It's a Family Affair for Death Squad President 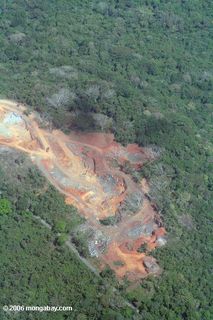 Earlier this week, an arbitration panel at the World Bank heard the first round arguments of the first environmental case under the investor-to-state arbitration mechanism of the Central America Free Trade Agreement (CAFTA) to date.  The case stems from Pacific Rim’s bid to establish a gold mine in the 's largest river, Rio Lempa.   planned to use hundreds of tons of cyanide and hundreds of millions of liters of water per year to recover the gold from the ore, threatening the water resources that thousands of people rely upon.

Initially possessed a permit to conduct exploration activities near Rio Lempa, but regulations required it to submit a feasibility study and gain government approval before it could begin actual exploitation of the mine.  Although applied for an exploitation permit, it failed to submit the feasibility study.  In the face of growing opposition,

In December 2008, Pacific Rim formally launched a CAFTA claim for hundreds of millions of dollars in compensation, claiming that ’s actions constituted discriminatory treatment and expropriation of its investment.  CAFTA’s investor-to-state dispute settlement provision is very similar to NAFTA’s investor-to-state provision in which foreign corporations can claim damages if a government action, including environmental regulations, constitutes expropriation of an investment or discriminatory treatment. Under NAFTA, several environmental and public interest laws have been challenged in the , , and (see our page on these cases here for more info).  It seems that trade negotiators did not learn the lesson from NAFTA and included this investor-state provision in CAFTA, opening the door to outrageous challenges to essential environmental laws like we now see in the case.

On Monday and Tuesday the tribunal at the World Bank heard Pacific Rim and wrangle over ’s preliminary objections to the case proceeding. Lawyers for argued that was properly following its own mining laws and that these laws apply equally to all mining companies so they cannot be discriminatory.  Lawyers for , on the other hand, mostly argued procedural questions.  The arbitration panel is expected to render its decision by August 2nd, at which point either the case will be dismissed or hearings on jurisdiction and standing will proceed. A video of the hearings can be viewed here.

You can take action to ask President Obama to exclude these investor-to-state arbitration provisions from future trade agreements here.

Thanks for your comments! See our Pacific Rim page for the latest updates about this important issue: http://www.citizen.org/Page.aspx?pid=4212