Home Archives Subscribe Back to TradeWatch.org
IMF on Capital Controls: For Them Before It Was Against Them?
Not enough canola to remove the bitter NAFTA taste

Yesterday, the Wall Street Journal wrote an editorial in which it blasted the 35 percent safeguard tariff against Chinese tires imposed by the United States in September of last year. The U.S. imposed the tariff due to a huge surge in tire imports from China that materially harmed domestic manufacturers. According to the Wall Street Journal:

The measure hasn't boosted employment. In the first five months of this year, the number of workers at U.S. tire factories fell about 10% compared to the same period last year, according to an analysis from the pro-trade U.S.-China Business Council.

Strictly speaking, the statistic that the U.S.-China Business Council claims is correct. However, this statistic cannot lead us to the conclusion that employment in the American tire manufacturing sector has continued to suffer with the tariff upon Chinese tires.  The graph below reveals how the comparison data seems to have been selected specially to support the desired negitive conclusion. First, the data referenced: According to the Bureau of Labor Statistics (BLS), there were 50,300 workers employed in the American tire manufacturing sector in June 2010, the most recent month with available data.  By contrast, only 49,100 workers had jobs in tire manufacturing in August 2009, the month before the tariff was imposed.  Since the BLS does not seasonally adjust data for small sectors of the economy, there may be some hidden seasonal effect here; 51,700 workers were employed in tire manufacturing in June 2009, though this is only slightly higher (1,400 jobs relative to 50,300) than tire employment in June 2010. 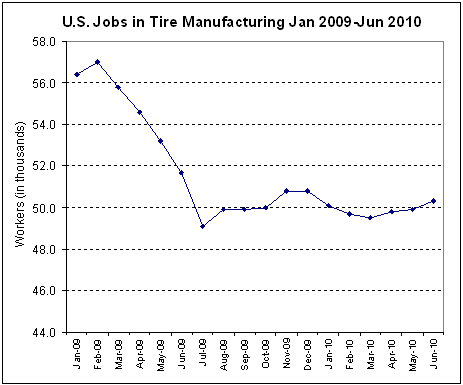 The graph makes clear that by the end of the summer of 2009, tire employment began to stabilize, which happened about the same time that the tariffs were imposed.  Correlation certainly doesn't indicate causation, but given the evidence it is quite possible that the tariffs played a role in the tire employment stabilization. The graph also makes it obvious why the U.S.-China Business Council found that "in the first five months of this year, the number of workers at U.S. tire factories fell about 10% compared to the same period last year."  It is simply because in the first half of 2009 - before the tariff was imposed - employment in the tire sector was steadily plummeting! So, when the first few months of 2009 are averaged in (with their comparatively high employment levels which were being eroded every month by the import surge), tire employment in early 2010 looks worse by comparison to that average.  However, again, the graph makes clear that in fact by the end of the summer of 2009, tire employment finally began to stabilize. This is the period when the tariffs went into place.

Besides the cherry picking of stats, what is vexing about the way that the WSJ presents the issue is that it seems to believe that Obama came up with the idea of this safeguard out of the blue and that he had sole discretion in the decision. The WSJ refers to the tariff as "Mr. Obama's tire tax."  In fact, the U.S. International Trade Commission (USITC), and independent federal body, rigorously analyzed the numbers and issued a recommendation to Obama that a 55 percent tariff be imposed on Chinese tire imports. The 35 percent tariff that Obama chose to impose was actually lower than the tariff that the USITC recommended. Rep. Sander Levin's website has a great Q&A on the Chinese tire tariffs.